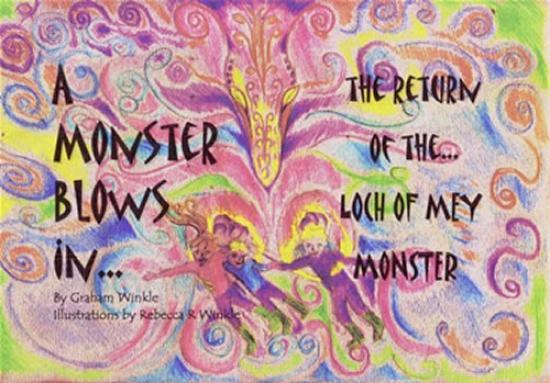 A number of children around the County were thrilled to be awarded special framed pictures and certificates signed by the author and artist at the end of term assemblies.

The competition was to draw the best picture or write the best poem about the monster.

An exhibition of the winners and all the entries will be on show at the County Show 21st July on; 'The Loch Of Mey Monster' stand, and there will be an opportunity to vote for your favourite work overall .The overall winner will have their work appear in the 3rd book in the 'Loch of Mey Monster' series!!

Also on show day there will be auditions for primary age children to take part in recording 'The Loch of Mey Monster' song !

That and......Storytelling and a chance to send a message to the monster.

The third book in 'The Loch Of Mey Monster' series; "A Search For A Monster" was launched on Saturday 1st December 2007.   In the most stunning and lengthy story so far we find out the answer to one of the ultimate questions.Does The Loch Of Mey Monster really have a mate? "A dark shadow engulfed the shed a gentle breeze brushed their faces then a huge silent figure landed beside them.
[]
21/5/2006