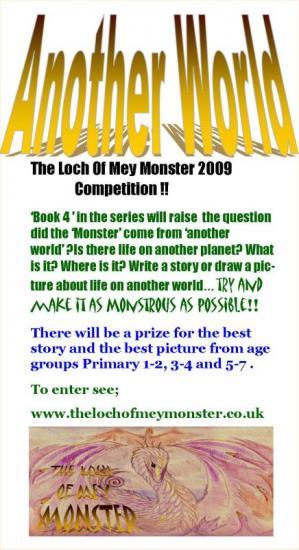 'A Beautiful Monster' suggests our Monster may have come from another world !

The best school from last years competition Castletown are currently practicing to record; 'The Loch Of Mey Monster Song' with the author this should come out later this year.

The fourth book in the 'Loch Of Mey Monster' series
' A Beautiful Monster' is appearing step by step on You tube and of course www.thelochofmeymonster.co.uk

Heres the link to have a look at the first 10 mins read by the author.http://www.youtube.com/watch?v=R9z70DmISms

The story will appear in book form later in the year.