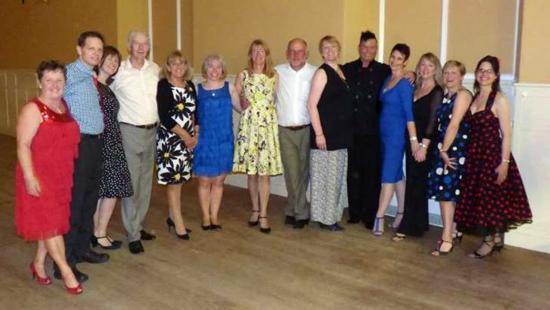 Thurso come Dancing members are going from strength to strength and doing well increasing their levels of dancing that have been recognised in the awards received at recent tests. 10 members travelled to Lossiemouth to be tested and one member was tested on a video.

The group attended a social dance in the evening along with all the members of Caroline Coombers Dance School.

We also attended workshops on the Sunday, in Tango and Samba which were taken by the examiner Su Cooper and one of her teachers David Pollard, who travelled up from Oxford to test everyone.

The classes in Thurso are now changing to accommodate the increasing numbers.

Thursday nights - Thurso Girl Guide Hall
7 pm to 8 pm New beginners - Basics steps in Waltz, Quickstep, Cha Cha, and Jive. Introduction to Rock n Roll and some sequence dances in Tango and Foxtrot (present class members welcome to still attend at this time to re-learn your basics, while concentrating on tightening up technique.)

7.30 pm to 8.30 pm Improvers class - Building up different routines, with a few more steps and technique also picking up the sequence dances, Rumba and Tango.

8 pm to 9.30 pm Medal Class - this will continue as normal, but will introduce the other Ballroom and Latin dances we have not yet covered, such as Slow Foxtrot, Viennese Waltz, Samba and Paso Doble.

Tuesday nights - Sea Cadet Hall Thurso.
7.30 to 9.30 pm: Beginners class learning the basics in Waltz, Quickstep, Foxtrot, Cha Cha Cha, Jive, Samba, Tango and Rumba. Hopefully we will get you moving round the dance floor with a bit of confidence and looking like you are enjoying it! Sequence dances and Rock and Roll also on the programme for a bit of fun too!

On the 2nd to the 4th of November 2018, Thurso Come Dancing are hosting the first ever "FarNorth Dancefest".   We are bringing 4 teachers from the Inverness area to 4 venues in Thurso to run simultaneous workshops for a weekend extravaganza.
[Dance Groups]
21/4/2016

We hold classes which are aimed at introducing everyone to Ballroom and Latin dances, but also giving a bit of help to get some confidence to lead and to follow when social dancing too.   The classes are at Beginner Level but we also have a later class where the members are working on Medal routines and more advanced steps.
[Dance Groups]
29/4/2015

Get your tickets for a Thurso Come Dancing social in Mackays Hotel, Wick..
[Dance Groups]
8/4/2015