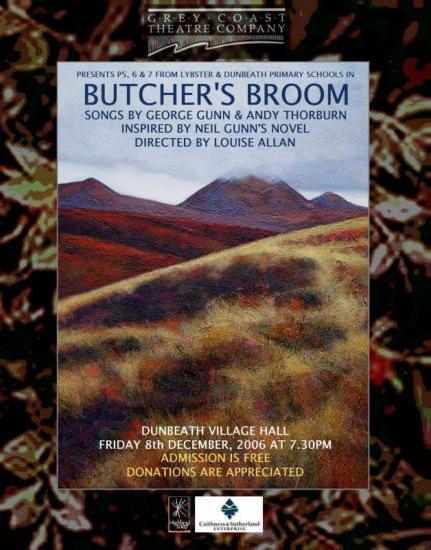 Butcher's Broom by Neil Gunn was published in 1934. George Gunn and Grey Coast Theatre have produced their own version adapted with songs by George Gunn and andy Thorburn. Directed by Louise Allan and with the children from Lybster and Dunbeath schools making up the cast.

Head over to Dunbeath Village Hall on Friday 8th December at 7.30pm.

Admission is FREE and donations are welcomed.

Caithness Arts will be presenting a mini 'Festival of Drama' early next month.   Grey Coast Theatre Company will be spearheading the festival with a new play from Caithness writer George Gunn.
[]
21/8/2009

After 17 years and more than 35 productions, George Gunn is stepping down as Artistic Director of Grey Coast Theatre Company.  George founded Grey Coast in 1992 to produce theatre which is relevant to the culture of the North, to promote new writing for the theatre in the North and to bring the culture of the North of Scotland to the rest of the country through locally produced theatre.
[]
16/10/2008

For a larger version of the poster go HERE You may need to click on it to enlarge it.   Where And When Dunbeath, Caithness - 8th -10th November 2007 Three Caithness organisations have joined forces this year for a three-day festival called 'Light in the North - a Celebration of the Life and Work of Neil M.
[]
16/2/2006

Saturday 10th December 8pm "RED FISH" is an exciting new development for Grey Coast Theatre Company as it is the first time the company has been awarded a Scottish Arts Council music commission which has enabled long term Grey Coast musical collaborator Andy Thorburn (of Blazin' Fiddles etc.) to write music for the company well ahead of the pressure of production.   "RED FISH" is the unbelievable story of a Klondike in the north, of a small town which literally blows up.
[]
10/6/2005