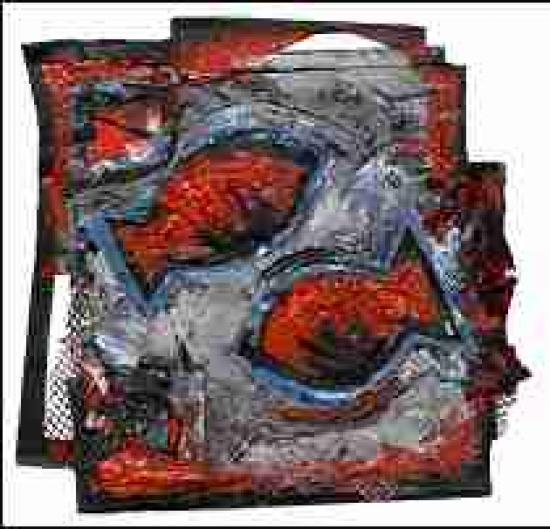 "RED FISH" is an exciting new development for Grey Coast Theatre Company as it is the first time the company has been awarded a Scottish Arts Council music commission which has enabled long term Grey Coast musical collaborator Andy Thorburn (of Blazin' Fiddles etc.) to write music for the company well ahead of the pressure of production.

"RED FISH" is the unbelievable story of a Klondike in the north, of a small town which literally blows up. Passions rise and hearts beat faster as two young people, she from Caithness and he from one of the western islands, struggle to hold onto each other and to themselves as all around them everything they have ever known is turned upside down.

The small town of Vik was sleeping peacefully until along came the mysterious RED FISH and things would never be the same again. The economy booms and the population trebles. From a handful of pubs there are now over eighty. Money flows like whisky down the streets. People are crowded together like the very fish they catch. A riot ensues and the Vik erupts like a volcano.

How can you love when everyone around you seems so full of hate? How can you hold onto what you believe when nobody seems to believe in anything?

The performance on Saturday night (10th December) will be the result of one weeks residency by Grey Coast Theatre Company at Lyth Arts Centre and will be a unique experience for a Caithness audience to witness the result of the work produced by two of Scotland's most experienced and dynamic theatre practitioners, George Gunn and Andy Thorburn, and two of the latest examples of Caithness acting talent, Helen Mackay and Iain MacDonald, both of whom are graduates of North Highland College's H.N.C. in Drama (Touring Theatre) and who both have worked with the Scottish Youth Theatre.

"Obviously the parallels in RED FISH are with Wick, its boom years in the herring industry and its current decline," says Grey Coast Theatre Company Artistic Director and playwright, "but RED FISH is set in a Wick (Vik) of the future and deals with real environmental issues, such as the gradual warming of the North Sea and the gradual migration north of such traditional fish species as haddock and cod."

"The conceit of the play is 'What would happen if these species were replaced with a foreign, southern species, who fill the gap left by the native species, and if this incoming species, these RED FISH, arrived in such numbers as to make a new commercial fishery viable, would we repeat the economic and environmental mistakes of the past, or would we find some new way of dealing with cycle of boom and bust?'"

"The history of Wick tells us that we will make the same mistakes but, who knows, perhaps we might just this once learn from history. RED FISH asks all these questions through poetry, song and, of course, music."

"With the vast musical and theatrical experience which Andy Thorburn brings and the raw, hungry talent which Helen and Iain bring, it is an artistic experience which the people of Caithness will savour, albeit just for one night. But RED FISH is the beginning of something. With the Scottish Arts Council commission we can go forward with Andy and develop the piece and give Caithness, Scotland and the world something they will not forget. Grey Coast has been working steadily and hard for 13 years and we are just beginning."

Caithness Arts will be presenting a mini 'Festival of Drama' early next month.   Grey Coast Theatre Company will be spearheading the festival with a new play from Caithness writer George Gunn.
[]
21/8/2009

After 17 years and more than 35 productions, George Gunn is stepping down as Artistic Director of Grey Coast Theatre Company.  George founded Grey Coast in 1992 to produce theatre which is relevant to the culture of the North, to promote new writing for the theatre in the North and to bring the culture of the North of Scotland to the rest of the country through locally produced theatre.
[]
16/10/2008

For a larger version of the poster go HERE You may need to click on it to enlarge it.   Where And When Dunbeath, Caithness - 8th -10th November 2007 Three Caithness organisations have joined forces this year for a three-day festival called 'Light in the North - a Celebration of the Life and Work of Neil M.
[]
2/12/2006

Butcher's Broom by Neil Gunn was published in 1934.   George Gunn and Grey Coast Theatre have produced their own version adapted with songs by George Gunn and andy Thorburn.
[]
16/2/2006