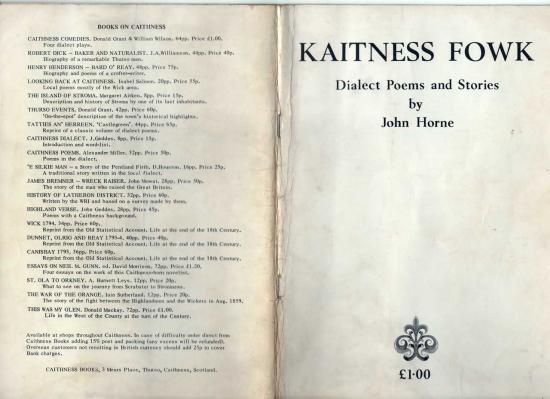 We are grateful to Margo Mackay for sending us the scans of these famous works by the late John Horne.

Although the name John horne is known thoughout Caithness for his dialect poems these have been out of print for over fifty years. A few well worn copies of Poems and Plays published in 1923 have beEn handed down and some of his classical dialect poems have been repirnted at times in the John o'Groat Journal.

His total literary output was very high but only a small fraction was in dialect - indeed he only published one other dialect book, A Canny Countryside. This contains stories about characters of the mythical Caithness village of Knockdry and the last edition was printed in 1906. In the early thirties he was working on a new edition with extra chapters but died before being able to accomplish this.

Click the Photo Gallery link to read all the works. To see a larger image of each one right click the image and open in anew tab or window.

We're Kaitness Fowk For A' That By John Horne,

We're Kaitness Fowk For A' That By John Horne Written c.  1923 Is there a fyarter fae 'e north, Fa hides his birth an' a' that, An' blushes 'cause his faither's hoose Is thecked wi' straw an a' that? For a' that an a' that - Wir modest crofts an a' that E foosum trosk we pass him by - We're Kaitness fowk an a' that.