IT'S GOING TO BE A ‘G'DAY' FOR INVERNESS AS EIGHT AUSTRALIAN BANDS SIGN UP FOR PIPING INVERNESS.   Piping Inverness takes place next month, with over 140 bands competing, including eight Pipe Bands from Australia, one from the USA, and one from Switzerland.
[Community Musicians]
25/3/2019

See poster for details.   A programme that includes Czech music that you may not have heard before.
[Community Musicians]
8/4/2018

All Singers and Orchestral Musicians are warmly invited to Come and Sing or Play Faure's Requiem with The Caithness Orchestra, conducted by Susie Dingle on Saturday 14th April 2018 in The Pulteney Centre, Wick.   Please come and join the Caithness Orchestra for a day (10.00am-1pm and 2-5.00pm) rehearsing Faure's Requiem (Hamelle version including violins in the orchestration).
[Community Musicians]
26/4/2017

All Singers and Orchestral Musicians are warmly invited to Come and Sing or Play Handel's "Messiah" with The Caithness Orchestra, conducted by Susie Dingle.   There is a charge of £10 per participant.
[Community Music Promoters]
6/8/2016

Over the past few days 4 - 7th August 2016, there has been a flurry of musical activity in Halkirk as they put together Tchaikovsky's epic 5th Symphony.  The orchestra has warmly welcomed visiting players, from as far a-field as Iceland and Cumbria, into their ranks.
[Community Musicians]
30/5/2016

Come and play Tchaikovskys 5th Symphony With The Caithness Orchestra 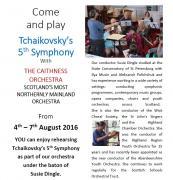 Come and Sing or Play The Messiah!

All singers and orchestral musicians are invited to join the Caithness Orchestra for a day to play/sing and rehearse selected choruses and arias from Handel's Messiah.   Members of the public are welcome to join us at 4pm to listen to an open play-through of Messiah excerpts covered during the day.
27/1/2015

The Caithness Junior Orchestra was created last September to give an opportunity to all young musicians aged 8 and over to make music together.   The orchestra now has 24 junior members from 10 different schools across Caithness and north Sutherland.
[Community Musicians]
7/9/2014

THE popular Caithness Big Band returns to Wick's Norseman Hotel, later this month, for a charity bash in aid of the Caithness Heart Support Group.   It's one of the group's biggest fundraisers and tickets both for the event, on September 13, and raffle, are available.
[Community Musicians]
2/9/2014

As part of this year's Blas Festival, Wick's Assembly Rooms will be rocking to the distinctive sound of the Red Hot Chilli Pipers on Saturday 6th September.  However many fans will be disappointed as the concert is now completely sold out.
[Community Music Promoters]
28/6/2014

The Far North Youth Orchestra is a brand new symphony orchestra, conducted by Susie Dingle, for young musicians aged 8 to 13 who live in Caithness or Sutherland.   On Saturday 28th June 2014 the group held a day of practice and lessons followed by a short concert to show parents and friends what they had learned that day.
[Community Musicians]
23/6/2014

Join A Choir In Caithness With Rising Success

Fresh from the success of their recent appearance at the Caithness Music Festival, where they scored one of the highest marks of the week (an outstanding 90) the Caithness and North Sutherland Adults Choir are looking for new members to join their very successful, fun choir.   At present there are approx 30 enthusiastic female members who would welcome any new members with a healthy appetite for singing for pleasure.
[Community Musicians]
2/3/2014

12 April 2014 10.00am - 5.00pm St Fergus Church, Wick All singers and orchestral musicians are invited to come and join the Caithness Orchestra for a day (10am-5pm) playing & rehearsing extracts from Mozart’s “Requiem”.  The conductor will be Susie Dingle.
[Community Musicians]
26/12/2013

The Wick Pipe Band Hall will be the venue for a traditional music concert on Saturday 14th December 2013 starting at 7.30pm.  The concert will feature the well known musician Carol-Anne MacKay along with some of the musician friends she has met along the way and some of her pupils.
[Community Musicians]
3/8/2013

Thursday 8th August 2012.  - The centre of Wick will resound to the skirl of the pipes as Wick RBLS Pipe Band is joined in the Market Square by the Happy Pipers from Lucerne in Switzerland.
[Community Musicians]
24/3/2013

All Singers and musicians are welcome to come and join the Caithness Orchestra for a day playing and rehearsing selected choruses and arias from Handel's "Messiah." The day (15th April 2013) will be conducted by Susie Dingle and will run from 10.00am - 5.00pm with breaks for lunch and snacks.  At 4.00pm, members of the public are welcome to come and listen to an open play-through of the work covered during the day.