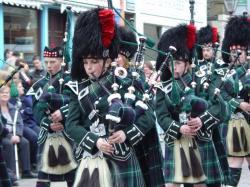 IT'S GOING TO BE A â€˜G'DAY' FOR INVERNESS AS EIGHT AUSTRALIAN BANDS SIGN UP FOR PIPING INVERNESS.   Piping Inverness takes place next month, with over 140 bands competing, including eight Pipe Bands from Australia, one from the USA, and one from Switzerland.
[]
14/5/2016

As part of this year's Blas Festival, Wick's Assembly Rooms will be rocking to the distinctive sound of the Red Hot Chilli Pipers on Saturday 6th September.  However many fans will be disappointed as the concert is now completely sold out.
[]
26/12/2013

The Wick Pipe Band Hall will be the venue for a traditional music concert on Saturday 14th December 2013 starting at 7.30pm.  The concert will feature the well known musician Carol-Anne MacKay along with some of the musician friends she has met along the way and some of her pupils.
[]
3/8/2013

Thursday 8th August 2012.  - The centre of Wick will resound to the skirl of the pipes as Wick RBLS Pipe Band is joined in the Market Square by the Happy Pipers from Lucerne in Switzerland.
[]
6/6/2007

Wick RBLS Pipe Band took advantage of the roadworks which caused the overnight closure of High Street outside the Pipe Band Hall to hold a practice prior to their visit to Germany.  The practice provided an unexpected treat for a large group of German tourists staying overnight in the town.
[]
28/2/2007

"WHEN WILL I BE FAMOUS" WINNERS TO APPEAR IN WICK

The winners of last Saturday's BBC1 programme "When Will I Be Famous", the Red Hot Chilli Pipers have agreed to play at a Massed Pipe Band event in Wick in September.  The live TV show is hosted by Graham Norton and each week 8 different acts compete for a £10,000 first prize.
[]
16/9/2006