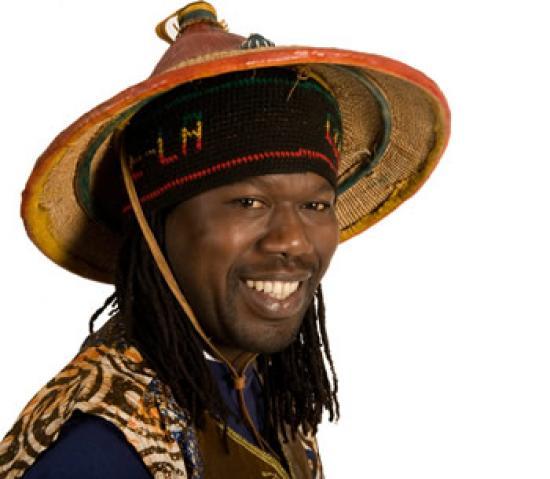 Scottish-based Senegalese singer Samba Sene and his band Diwan come to Lyth for an evening of exuberant and funky afro-beat dance grooves: "mblax". With colourful costumes and traditional instruments, including the kora , the djembe and the tama , the performance has a strong visual element and an irresistible energy, optimism and fun.

A regular feature of the country's festival circuit, the band has performed at the Solas Festival, Ecofusion, Kelburn and Wickerman, playing traditional Senegalese and African music as well as original material. In 2011 the band released its debut album Remind Me (Fatalima) to critical acclaim. Unafraid to tackle serious issues in their songs - for example homelessness or equal rights - it is the music's irrepressible buoyancy which wins through in the end.

Apply for one of the 20 places in the 6.30pm dance class run by Steve Hicks and get a buffet supper and a free ticket to the Samba Sene gig which starts at 8pm that evening.

"Things were jumping by the end of the night ... the band's dancers and many of the audience leppin' about enthusiastically." (The Scotsman)

"Samba's voice soars, pleads, chants, chides, celebrates and grooves over dancing guitar riffs, pattering percussion, fruity brass and keyboards in organ mode with beautiful balafon and ngoni touches. Catch him live if you can." (The List)