The Outside Track - International Celtic Band 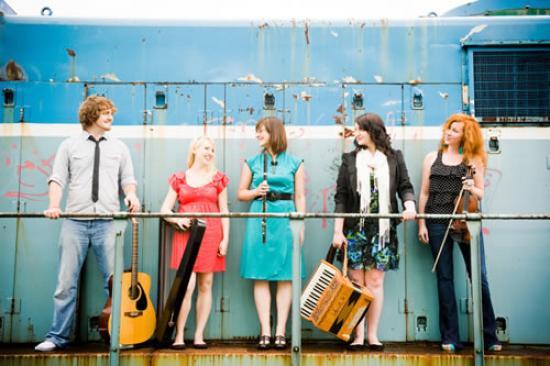 Acclaimed international Celtic band, The Outside Track, are celebrating picking up the 'Group of the Year' award at both the Live Ireland Music Awards 2012 and the TIR Irish Music Awards.

The band were crowned on January 1st, and celebrated double success as their lead singer, Norah Rendell was also awarded the accolade of 'Vocalist of the Year'.
The band have a new album in the pipeline, due for release later in the year, and will embark on an 11-gig national tour in February. Two albums now from this multi-national contingent have stamped them not only as yet another new force in the music, but indeed, as Live Ireland described them, "Among the top groups in the world....traditional, creative, and brilliant on every cut".

Hugely popular young ambassadors for roots music, The Outside Track's marriage of Canadian, Scottish and Irish music and song has been rapturously received around the world. Hailing from Scotland, Ireland, Cape Breton and Vancouver, its five members are united by a love of traditional music and a commitment to creating new music on its foundation. Their blend boundless energy and unmistakable joie de vivre has won them a large following which has seen them headline festivals all over the globe. Ailie Robertson, the band's harpist said, "It's a true honour for us to win these awards, and we feel very humbled to be names alongside so many other fabulous musicians - it's a massive boost for us before we head into the studio to record our third album.

Back on the road in February, ports of call will include the Celtic Connections festival in Glasgow, The Green Note in London, and Galeri Caernarfon in Wales as well as Hepworth, Bridgwater, Pontypridd, Edinburgh, Birnam, Langholm, Mellorbrook, Gartly, Baston and Oldham.