The Stu Brown Sextet in "The Raymond Scott Project" 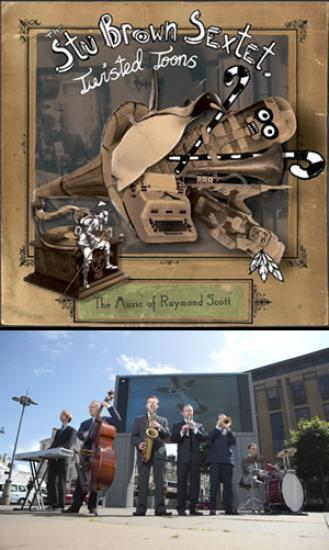 Raymond Scott wrote and performed remarkable musical scores for all the amusing 1940s Looney Tunes cartoons creating manic off-beat compositions to underscore the antics of characters like Bugs Bunny and Daffy Duck. Since 2008, Glasgow musician Stu Brown has had enormous success with his re-scored versions of this music, playing to sell-out audiences across the UK and now, finally, at Lyth. The performance includes a short film about Scott's work.

Drummer Stu Brown regards American pianist Raymond Scott as one of the great unrecognised musical geniuses of the 20th century, and has dedicated this project to performing the unique and often zany music of the man whose compositions earned him a cult reputation for cartoon music in the 1940s even though they were not actually written for that purpose.

Scott also developed the world's first electronic sequencer, but remains largely unknown. Stu claims that the six-piece Project "is currently the only band in the world playing a programme consisting exclusively of Raymond Scott's music". Since its formation, the group has performed at both Glasgow and Edinburgh International Jazz festivals and at London's Kings Place and Purcell Room.

Each show opens with a specially commissioned eight minute film by Scott's son, featuring material from his full length documentary Deconstructing Dad: The Music, Machines and Mystery of Raymond Scott. It is a perfect introduction to the music and includes interviews with representatives from the Raymond Scott Archives, a variety of musicians, Scott's widow and Scott himself. As the film ends, the original sound-track recording of War Dance for Wooden Indians segues magically into the same piece being played live on stage by The Stu Brown Sextet.