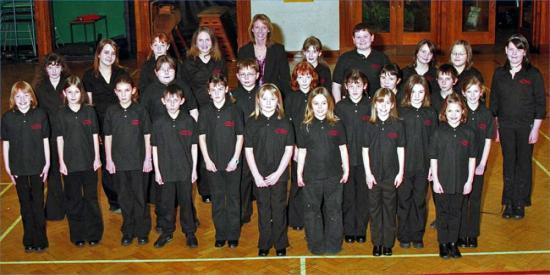 UKAEA Dounreay have sponsored uniforms for Caithness & North Sutherland Children's Choir, which is run for children from Primary 4 age to Secondary 2. Throughout the year the choir sings at local events entertaining all ages of the community.

Heather Lewry, conductor and chairperson of the choir said "Caithness & North Sutherland Children's Choir would like to thank UKAEA for their sponsorship of new uniforms. The children were involved in choosing the colours (black and red) and are delighted with the end product. The children perform throughout the county regularly, and can now proudly wear their uniforms whilst performing".

Pictured with the choir and Heather during their weekly rehearsal is Marie Mackay of UKAEA Dounreay Communications.