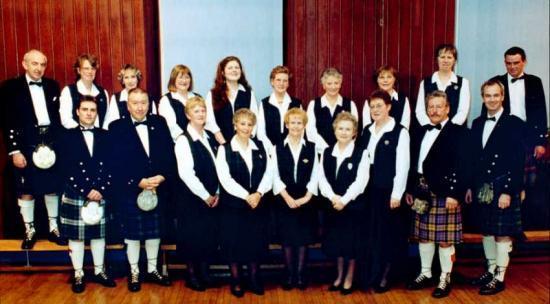 For Caithness Rural Gaelic choir the start of the new year means the beginning of the road to the Royal National mod in Largs. So far, their best placing in the event has been third. this was gained as the fort William Mod in the same year as the founder member Raymond Bremner won the presitgious Gold Medal. Raymond is a Gaelic learner as are most of the other choir members.

The choir, under conductor, Norma Sinclair, is about to embark on learning the new songs for the Mod and it is suggested that, if you are interested in joining them, now would be a good time to do so. All that is asked of you is that you can sing in tune - though a sense of humour would be an advantage.

There is no audition and the atmosphere is friendly. So if you would like to give it a try please don't hesitate. Phone Norma on 01955 602615 or email [mail]margaret.wood[AT]highland.gov.uk[/mail] for information or details.


Pictured in the photograph (from left to right)

The ladies section of the Caithness Gaelic Choir travelled south on Saturday 8 March 2003 to participate in the Inverness Music Festival.   Under conductor Norma Sinclair and with accompanist Barbara Nicol, they returned home the proud winners of the St.