A Brief History of Scotland 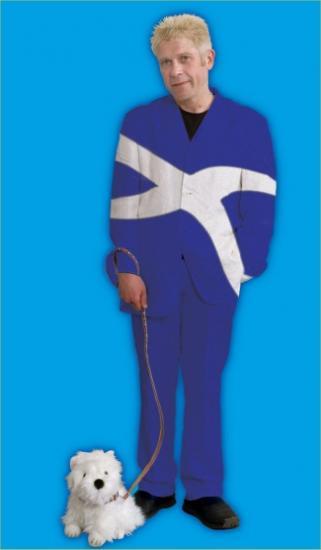 'A Brief History of Scotland', is a look at one small nationąs past and present, who we are, how we got here and the struggles we have confronted on that journey. In particular, the continuing struggle we have had with our much larger and more powerful neighbour.

Ironically, given our current low self-esteem as a nation, the early years of the new millennium are some of the most significant in Scotlandąs history. Yet the achievement of devolution and the establishment of our own parliament have left many Scots underwhelmed.

Was it always this way ? Has Bannockburn merely been hyped-up by the passage of time ?

'A Brief History of Scotland', is a tongue-in-cheek debunking of the "glorious" past and a wryly satirical look at the less-than-glorious present of this nation of contradictions. The events, the people and the places that have shaped our nation and its culture are celebrated in stand-up, storytelling, poetry and song.

The show looks at the key events that have shaped Scotlandąs history.

How we saw off the Romans after they chose to settle in middle-class suburbs like Bearsden and Cramond.
How Robert the Bruce was crowned first king of Scots by being pretty good at stabbing.
How no-one actually gave a toss about Bonnie Prince Charlie.
How the Highland Clearances were not all bad.
How we nearly became the first Communist country in Europe.
How the scandalous overspend on the Parliament Building is a direct result of the 1978 World Cup fiasco in Argentina .

Most of all Scotlandąs history has been shaped by the Scottish people. 'A Brief History of Scotland', is a hilarious look at those peoplesą qualities and faults. For a small country we have achieved much in education, politics, science and the arts. But we are also world leaders in drunkenness, knife crime, childhood obesity and sectarian bigotry.

But perhaps things are about to change. We are now officially a nation of non-smokers, junk food is banned from our schools, our sportsmen have started winning things, the Executive have grasped the nettle of sectarianism and weąve seen off bird flu. Do we now stand on the brink of a new Enlightenment ?