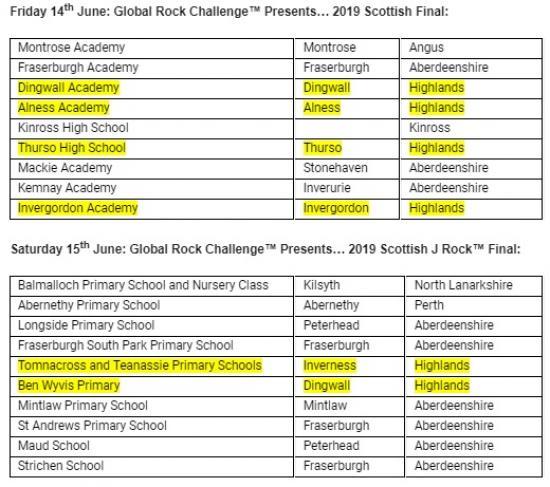 Six Highland schools will be travelling to Dundee to take part in the 2019 Scottish Finals! Dingwall Academy and Alness Academy both qualified for the finals after they won their Inverness heats. The schools scored incredibly highly, each winning an amazing 12 Awards of Excellence at their heat! Alness Academy also won the Performers Choice Award, which sees the other schools vote for their favourite performance. Thurso High were also popular among the other competitors, winning the Performers Choice Award at their heat. They have qualified for the finals alongside Invergordon Academy as high scoring runners up!

Two Highland schools will be attending our first ever Scottish J Rock Final! Both schools qualified after winning their Inverness heats. Tomnacross and Teanassie Primary Schools in particular saw great success, winning every available Award of Excellence for their performance, as well as the Spirit of Rock Challenge® Award, in which the other competing teams vote for the school who has been the friendliest and most supportive. They will be looking to continue this success, hoping to be crowned our first ever Scottish J Rock™ Champions!

Rock Challenge Production Manager, Jonny Wood, comments: "I can't wait to see how the schools have developed their performances between the heats and the finals! The standard this year has been incredibly high, and we are set to have two spectacular finals!"