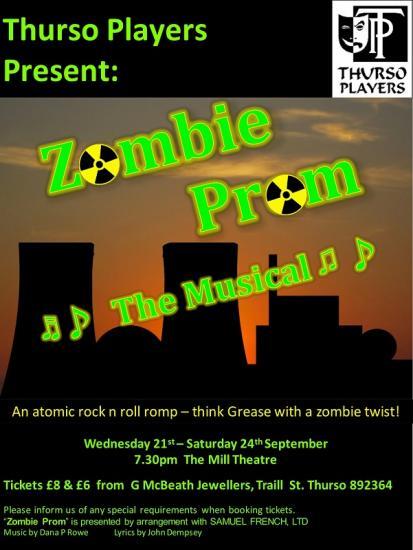 Act I
Zombie Prom opens at Enrico Fermi High School. The students go through their daily routine ("Enrico Fermi High") and the audience meets Jonny, a rebel who spells his name without the traditional 'H.' We also meet the good-girl heroine, Toffee, and Miss Strict, the principal of Enrico Fermi High School. The song is ended abruptly by an air raid siren, signalling a duck-and-cover drill (the school is located near an unstable nuclear power plant), and Jonny and Toffee fall in love ("Ain't No Goin' Back"). They date for several months before Toffee's parents forbid her from seeing Jonny. She reluctantly breaks up with him, and Jonny commits suicide by hurling himself into the Francis Gary Powers nuclear power plant. He is buried at sea in international waters, with the rest of the nuclear waste.

Three weeks pass, and Toffee's friends begin to notice that she's been upset and is unable to focus on her baton twirling. She expresses her sadness over Jonny's death, and retells the night of Jonny's death from her point of view ("Jonny Don't Go"). Meanwhile, the rest of the school gets itself ready for the senior prom, which is rapidly approaching. Toffee continues to wear black clothing in mourning for Jonny ("Good As It Gets"). Her friends insist that she should go to Prom, and get over Jonny's death, since it has been "three whole weeks!"

Toffee begins to hear Jonny's voice on occasion ("The C Word"). Her friends urge her again to move on, but Toffee insists "he's dead, but he ain't gone." Frustrated, she states that "life's a trap of the same old crap." 'Crap,' however, is a taboo word at Enrico Fermi High, and Miss Strict reminds her of the school's philosophy ("Rules, Regulations, and Respect").

Much to her surprise, Toffee begins hearing Jonny's voice emanating from her locker ("Blast From The Past"). He begs to be let free and bursts from the locker, shocking the other students. This is not well-received, and the students are scared and disgusted by Jonny's deteriorating appearance.

Not to miss out on a story, reporter Eddie Flagrante picks up on the story from Josh, a cub reporter from Enrico Fermi High ("That's the Beat For Me"). He elaborates on his job, and his goal in journalism: "Tamer than Playboy but bigger than Life."

Trying to cope with Jonny's unexpected reappearance, Toffee talks with him about what brought him back - her voice, as it turns out ("The Voice in the Ocean"). Inspired to return to school, Jonny is ready to graduate ("It's Alive"). Miss Strict, however, has different plans. She does not approve of zombies and refuses to let him reenroll, despite Jonny's new appreciation for the wisdom of what Miss Strict teaches.

Toffee is not certain what to do ("Where Do We Go From Here?"). Her friends believe that she should not have to take Jonny back, but Jonny believes that if she still loves him, she should. Toffee ends up rejecting him. Josh points Jonny out to a visiting Flagrante, who recognizes Miss Strict. They argue over Jonny's rights ("Case Closed") and end up in a stalemate. Flagrante believes Jonny should return, while Miss Strict believes the school rules should be enforced: "Rule Number 7, Subsection 9, of the handbook of student life, says: No zombies, no zombies!"

Act II
The students at Enrico Fermi High school have begun to protest that Jonny should be let back into school ("Then Came Jonny"). Miss Strict retaliates by canceling the pep squad; not slowed by her tactics, they begin to disobey the dress code. Miss Strict dismantles the baseball team, but even so, the students make a petition to reinstate Jonny as a student. Miss Strict puts all seniors on probation, threatens to cancel all after-school events, and promises that at the next sign of rebellion, she will cancel the senior prom.

Flagrante has continued to report on the Jonny Warner story on television ("Come Join Us"). During a commercial break, the journalist asks for the number to Our Lady of Divine Masochism, a Catholic orphanage for unspecified reasons. While being interviewed by Flagrante, Jonny explains that he cannot give up love because it is what brought him back ("How Can I Say Good-Bye?").

Meanwhile, Toffee can't keep focused on her schoolwork ("Easy to Say"). She debates with herself if she should take back Jonny. Her friends call on a party line and talk with her about her situation. None of them missed Jonny's TV appearance, which was broadcast on "all three channels." In the end, Toffee chooses to take Jonny back.

Flagrante tracks down Miss Strict and begins flirting with her ("Expose"). It is revealed that they were lovers in high school, with a very physical relationship - the last time they were together, Miss Strict reminds him, was in the back seat of his father's Studebaker. Each feels that the other had abandoned them, but no specifics are revealed.

Prom night arrives, and the students marvel at how the school has been decorated ("Isn't It?"). Toffee approaches Jonny, and tells him that she'll always be with him. They dance and continue to discuss their love for each other ("Forbidden Love").

Jonny's appearance at prom did not go unnoticed by Miss Strict ("The Lid's Been Blown"). Stopping everything, she calls him out for being there. Eddie Flagrante appears in order to confront Miss Strict with her secrets, but she refuses to comment upon being questioned on why she hates Jonny Warner. The prom is canceled. Pushed by Flagrante, Miss Strict reveals her past ("Delilah's Confession"): she was dating "a boy from the wrong side of the tracks" despite her mother's warnings. On the evening of her own prom, she and Flagrante drove around before stopping off an old highway; the two had a baby. Once her parents found out, she was sent to a home for unwed mothers in Santa Fe, New Mexico to give birth. her son was taken away and adopted, and Miss Strict was never able to identify the child. Flagrante, who had investigated the orphanage, reveals that Jonny is their long-lost son, he then proposes to Miss Strict. Overjoyed, Miss Strict allows the prom to continue, and allows Jonny to go back to Enrico Fermi High. Toffee and Jonny get to have one more dance before the curtain drops ("Zombie Prom").