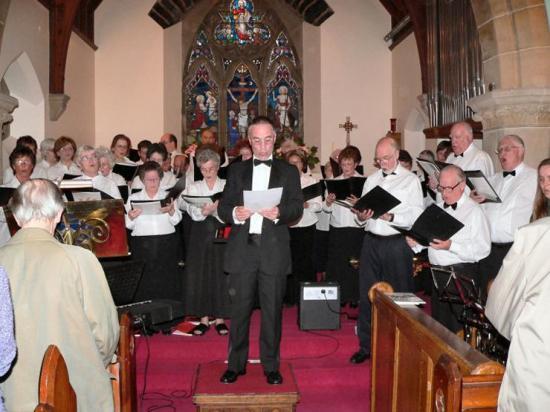 The concert held in the Episcopal Church, Wick on Friday 26 May 2006, by Wick Choral.
The concert was well attended and the audience were treated to items from Wick Choral, Caithness Handbell Ringers and a short Organ Recital by Margaret Widdowson.

The programme included -
Wick Choral - Mozart's Ave Verum, three pieces by Thomas Tallis, Zadok the pries by Handel, and sections from the Requiems by Faure, Durufle and Karl Jenkins.

The Bellringers performed a peice by Mozart, then a Japanese item using bell
plates and finished with a rousing Gospel piece.

The organ recital consisted of three contrasting pieces from the traditional
to the triumphal styles.

There was also 2 community hymns which were sung by all.

The programme will be repeated at another concert on Friday 2nd of June in the Episcopal Church, Thurso, at 7.30pm. Admission is free, donations will be gratefully received at the church door.

More photos of the event can be found HERE

The Caithness Handbell Ringers were joined in St John's church, Wick by Erica Sinclair on the clarsach, Craig Campbell on the organ and Bruce Gordon on the bassoon for an evening of music that included music by John Denver, Bach and Mozart.   The concert also played in St Peters, Thurso on 30 August..