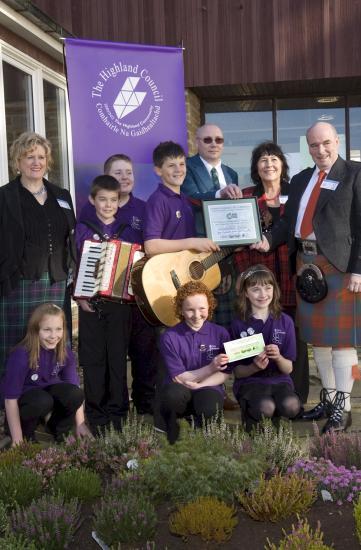 Fčis Ghallaibh Junior Folk Group A are winners of the Folk Group Competition for under 13 year olds at Mňd Ghallaibh 2010.

Sponsored by The Highland Council and Fujitsu, the Folk Group is an open category of competition for which groups have to sing two songs of their own choice with accompaniments of musical instruments.

Councillor Hamish Fraser Chairman of The Highland Council's Gaelic Committee said: "We are privileged to be collaborating with Fujitsu in sponsoring this competition. The quality of the musicianship was of an extremely high calibre, but there has to be a winner and I am pleased to say that Fčis Ghallaibh Junior Folk Group A won this exciting and popular competition.

"The young people are a credit to their schools, and local areas. Their enthusiasm proves that the hard work and commitment from both the young competitors and their instructors can reap worthy rewards. I believe that they will be fantastic traditional music bearers of the future and therefore wish them every success."

Congratulating Fčis Ghallaibh Junior Folk Group A on their achievement Ian Farquhar, Fujitsu North Area Team Leader said: "Fujitsu are very proud to be able to support the MOD as part of our long standing commitment to the Highland community, it is a fantastic celebration of Gaelic culture and the hard work of these talented young people. We wanted the prize to allow them to bring something back to their school to develop their musical talents and for all the students at their school."

John Morrison, Chief Executive of An Comunn Gaidhealach welcomed the partnership support for the competition: "An Comunn Gaidhealach are delighted that Fujitsu has offered a substantial prize to encourage youth participation at the Royal National Mod 2010. The strong relationship between The Highland Council and Fujitsu has resulted in an extremely attractive prize being donated by Fujitsu. We are confident that this will result in substantial interest in the Children's Mod in the years to come and we wish to record our appreciation to both Fujitsu and Highland Council for this support."

Fčis Ghallaibh Junior Folk Group A will be performing at the Children's Prizewinners' Concert which takes place 11 and 12 October at Thurso High School Games Hall.