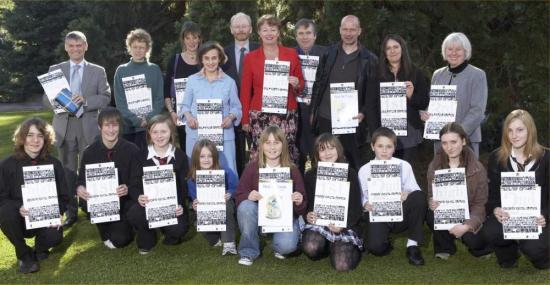 Winners of The Highland Council's Neil Gunn writing competition 2007 were announced today (Tuesday 2 October) at a prize-giving ceremony held at Strathpeffer Spa Pavilion.
Established in 1988 and organised by library staff from The Highland Council Education, Culture & Sport Service with support from the Neil Gunn Memorial Trust, this year's competition attracted over 400 entries. The adult prose and poetry sections were open to writers throughout Scotland, while the secondary and primary school sections were open to Highland pupils from S1-S4 and P5-7 respectively.

To celebrate 2007 Year of Highland Culture, the theme this year was 'Highland Spaces'. Artist John McNaught and storyteller and musician Bob Pegg worked with pupils from Highland Schools to produce a DVD showcasing the competition and featuring extracts from a range of competition entries as well as from the writing of Neil Gunn. John also produced commemorative banners and hand crafted the certificates that were awarded to all prize winners.

During the ceremony hosted by Area Libraries Officer for Ross, Skye & Lochaber Charlotte MacArthur and Reading Development Co-ordinator Cindie Reiter, cash prizes, DVDs and certificates were presented to the award winners in each section.

Anne Morrison from Lairg was winner of the open adult prose section with "Out West". In the adult poetry section six of the entries were judged to be of equal merit and were Highly Commended. Jessica Young from Teanassie Primary near Beauly was first in the primary writing competition for her prose entry, "Highland Spaces" and Alistair Coghill from Thurso High School was the winner of the secondary writing competition for his prose entry "Going Concave"

On reviewing the secondary school entries, it became apparent that in addition to having three individual prize winners, Thurso High School had also provided a number of other particularly well written entries. In recognition of this consistency, the Neil Gunn Trust made a Special Award of some of Neil Gunn's books to the school.

The Highland Council's Chairman of Education, Culture and Sport Committee, Councillor Bill Fernie attended the ceremony. He said: "The judges had a hard job coming to their decisions due to the high quality of the entries which showed examples of the vision and awareness that good writing always demands. This is in keeping with Neil Gunn's own vision as a Highland writer of world standing. I pass on my congratulations to all the successful writers and thank everyone who took part."

To read some of the winning entries go to
http://www.highland.gov.uk/leisure/libraries/librarynews/neilgunn.htm