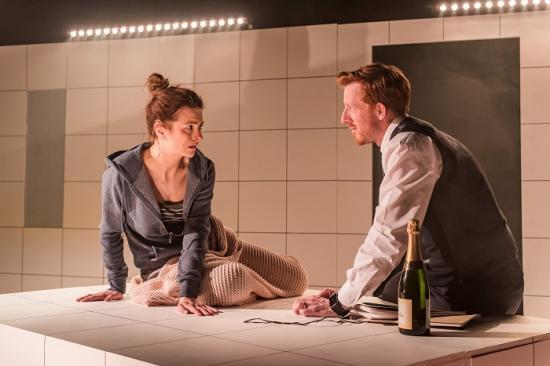 Shattered, a new play written by Lisa Nicoll will tour Scotland from 19 May. Inspired by interviews and life experiences, Shattered deals with the universal themes of grief, loss and isolation as well as the things that are left unsaid between the people to whom we are sometimes the closest.

The play is a partnership between In Motion Theatre Company and the Scottish Cot Death Trust and will also be performed as part of the International Conference on Still Births and Sudden Infant Death Syndrome in June in Glasgow.

Three years on from the sudden death of their baby, Lucy and Ben are struggling to find some kind of normality in their fractured world.   Lucy focuses, as she has for the last few months, on the people on the street who she watches day in and day out from her window, telling stories of them like a TV boxed set. She wants to be part of it all again. She wants to be close to Ben again.  Ben wants to be close to her and tries through humour and dancing to do this.

Lucy watches cafe owner Tom from the window; he is someone who used to be her friend, who visited her, who she confided in but who hasn't acknowledged her for months. He knows that she is there but he cannot speak to her or wave. Left alone for a few days in the flat Lucy has an encounter with stranger Katy which begins her reconnection with life.

Joyce McKellar, chief executive of Renfrewshire Leisure said: "We are always interested in new and innovative forms of arts and entertainment. We're particularly keen to give a platform to new writers, performers and artistic works. I'm sure audiences will enjoy this thought-provoking production of Shattered, when it debuts at Paisley Arts Centre."

Shattered is produced by In Motion theatre company in association with Paisley Arts Centre and funded by The National Lottery. www.inmotiontc.co.uk/shattered

About the crew and cast -

Lisa Nicoll is a producer, actress and playwright who trained at the Royal Scottish Academy of Music and Drama.  Until six months ago Lisa was producer at the Tron Theatre Glasgow. In this position she developed new writing, programmed work, secured funding, set up and ran The Tron 100 Club and created and produced the Tron 100 Festival - a festival of 30 short plays. Lisa established and runs new writing theatre company In Motion Theatre Company with Jordan Blackwood and Daniel Cameron where in 2016 she toured her play Where the Crow Flies across Scotland.  Currently she has secured funding for a spring tour of new play Shattered with In Motion Theatre, which she is also writing and producing; this play will tour to 15 venues across Scotland this year. She has also secured funding to develop and write a play under the Paisley 2021 banner which will tour in 2019. Between 2008 and 2013, Lisa toured theatre work all across Scotland including her one woman plays Acceptance and Home Run and secured funding from various sources to produce and write short films. In addition to this Lisa was commissioned to write short novel Leathered for teenagers. Lisa has often worked with the Playwright's Studio of Scotland where she was also mentored as a playwright.  Lisa also has a strong passion for film with the most recent film she produced in 2017 ‘Natalie' (Blazing Griffin), by Mikey Murray and featuring Kate Dickie, having great success at The Edinburgh International Film Festival, Berlin Short Film Festival, Aesthica Film Festival and The British Urban Film Festival.  Mikey and Lisa are now working on the feature film of this. Lisa is a firm believer in making things happen for the artistic community and supporting and developing creatives in new and positive ways.

Jordan is a theatre director and facilitator.

He trained at the Royal Central School of Speech & Drama and was a Resident Trainee Director at the King's Head Theatre. He is one third of the artistic team running In Motion Theatre Company - a Glasgow-based new writing company creating new work in response to people and place. For the company, Jordan has directed and developed various new writing projects - including the development of Daniel Cameron’s CARAVAN and Lesley Wilson’s WIRED, which ran as part of Army @ the Fringe in association with Summerhall.He is currently assistant directing on Stephen Greenhorn’s Passing Places at Dundee Rep.Recent credits include: Success, Royal Lyceum Theatre; The Progressive Playwright, Tron Theatre.

Jordan is a regular facilitator with the Royal Lyceum Theatre and has also toured nationally and internationally as a company manager with companies including DV8 Physical Theatre, Balletboyz and Zest Theatre.

Trained at Rose Bruford College. She recently finished the Belles Stratagem (Lyceum Theatre) and is delighted to soon be heard as the new teacher in ‘44 Scotland Street’ (BBC/Radio 4) and has just voiced her first computer game!

Kirsty was nominated for an Olivier Award for Best Actress in a Supporting Role along with the 2016 cast of Our Ladies Of Perpetual Succour (National Theatre of Scotland/National Theatre, London).

She trained at Edinburgh Napier University and graduated in 2015 with an Honours Degree in Acting and English Literature.

Television credits include: Trust Me (BBC One), Tyrant 2 (Fox).

Film credits include: Murder On The Orient Express, Trainspotting II.

Nebli trained at the Royal Conservatoire of Scotland, where he won the James Bridie Gold Medal for Best Performance in the title role in Charlie Sonata, as well as the Citizens Theatre Society Prize.

Fraser, is a Glasgow based Set and Costume designer. He trained in Production Arts and Design, at the Royal Conservatoire of Scotland. He now works as a designer, assistant designer and model maker.

Alan was the resident Musical Director for PACE Theatre Company for over 10 years and has composed original music and sound designed dozens of productions for them in that time. He also composed music for two 'Choices for Life' short films commissioned by Police Scotland and the independent feature film 'I Am Me' in 2014. He also writes and arranges music for Hopscotch Theatre Company, who tour schools throughout Scotland.

In Motion Theatre Company is a Glasgow-based new writing company led by director/facilitator Jordan Blackwood, writer/producer Lisa Nicoll and actor/writer Daniel Cameron. The company has a dual focus - creating and touring new work in response to people and place; and supporting other artists to develop their work.