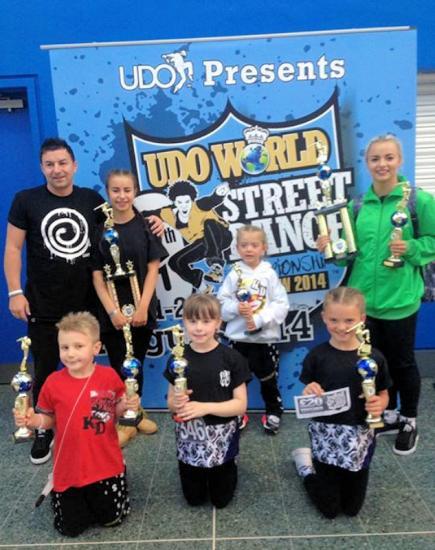 Rush.dance have just competed at the biggest street dance competition of the year. UDO (United dance organisation) have just held the World street dance championships in Glasgow at both SECC and CLYDE venues, with dancers from over 30 countries around the world from afar a field as Canada, Australia, Japan, America, Netherlands, Germany and many more, with 250 crews competing and over 6000 people attending. UDO have also announced it has been the biggest attendance of dancers yet to date with the competition running from Friday morning to Sunday night. STV news channel covered the competition and showed it on the STV Glasgow area, with our Rush girls training in the background.

Results on over the weekend -

Crew - Fenix Rise qualified in the top 5 out of 27 crews in there section on Friday to dance again at the Grand finals on Sunday, but they just missed out the top 7 awards. This has only been their third time competing as a crew together so to make the semi-finals at a world championships was just fantastic.

Quads – U14 open section Kelsey Ross, Laya Cowie, Rhiannon Mackay and Chloe MacGregor made it to the Quarter final stage.

Once again the Rush.dance kids have done us proud, (10 dancers and we come home with 8 trophies) as a small dance school from Caithness, just to qualify was massive but to go and have every kid make at least a semi-final in each section at the world championships was fantastic. As for Rebecca (2), Lauren, Koby (2), Hannah, Laya, Chloe to come home with World championship trophies was outstanding. This has been the biggest challenge to date as a street dance teacher this comp is the biggest around with only the very best in each section getting to compete. We have definitely put Caithness on the map, with lots of fab comments about how fantastic the Rush kids have danced and the places they have won over the weekend from other Teachers and spectators from around the UK.

As a dance school we improve every time we compete, we have a dedicated group of young talented kids all wanting to do their best where ever the competition may be, going forward we are looking to take it further and travel to more prestige’s comps around the UK.

*We are looking for new talent at Rush.dance, we are just starting a new term and have spaces in both Thurso & Wick classes whether it’s for Fun classes or to train up to perform with our competition kids at shows, competitions. Street dance is the biggest dance art form going around the world with it all over TV, Commercials, music videos, also all over TV shows like Got to dance and Britain’s got talent.

Rush.dance have just competed at UDO Central Scotland street dance championships in Perth, this is the first Qualifier for next year's World street dance championships.   Thousands of dancers from all over Scotland came all hoping to make a final and qualify for next year’s big one ‘the World championships’ Solo’s U6 Open, Erna Thain *Runner up* (she is only 3 years old and competing against kids up to age 5+ just shows how fantastic this little worker has done) U8 Novice, Troy Giles *WINNER* and new Scottish Central champion, Ava Cook 4th place.
[Dance Tutors]
8/8/2015

Rush.dance kids came out on top at the massive Scottish street dance competition - MAD STREET DANCE in Motherwell The competition is the 2nd biggest in Scotland with all the very best street dancers competing.   Results on the day - Solo sections, U10 Advanced Solo , Chloe MacGregor *Runner up* Chloe danced in the elite section to become 2nd best U10 street dancer in Scotland was such a fantastic achievement.