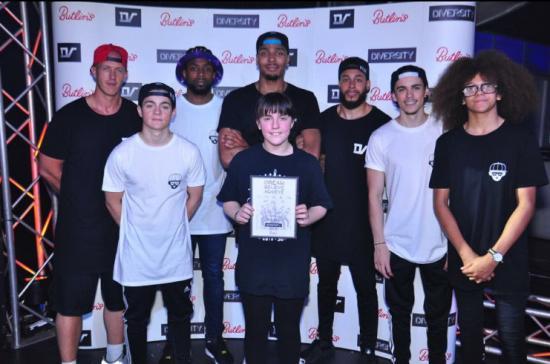 She was there for a granny (Sandra Jones) / grand-daughter holiday and had chosen this site because we had seen Diversity Dance Academies advertised on television earlier in the year.

The Academies are all about giving budding dance stars of the future an opportunity to meet Diversity, be coached personally by them and experience a face to face street dance masterclass. The Academies ran twice each day over three days and due to popular demand all Diversity Dance Academies were sold out.

Each Academy hosted approximately 70 to 80 children of varying ages and ability. The session started with all of them together to go through a 15 minute warm up lead by Perri Kiely (the young guy with the hair!) and some other Diversity members. After that they were split in to two groups; each group was coached by three members of Diversity; Beth’s group was coached by Jordan Banjo, Warren Russell and Terry Smith. The children were coached through the routine to the popular Uptown Funk by Mark Ronson and Bruno Mars.

At the end of the session both groups came back together and performed the routine for family and friends. But it wasn’t over yet. Following that it was announced 10 children were chosen by their respective tutors to receive golden tokens; this meant they had been chosen to perform the routine on stage with Diversity! Beth was chosen by Jordan Banjo. Choices were based on ability to pick up the routine, attitude, commitment and the energy put in to the routine. Excited wasn’t in it; Beth couldn’t believe she had been chosen.

After each Academy a dance show was put on by Diversity for people on holiday at Butlins and the children chosen performed the Uptown Funk routine in front of a full house on Butlin’s Centre Stage.

Dance Teacher Willie Miller "like I’ve said to both of them on their return home after their holiday, dance gives kids the opportunity to perform and gain experience, this last challenge for Beth will only make her confidence soar. Teachers Willie & Rebecca Miller are so proud of what Beth has achieved so far and to take her skills learnt at Rush.dance and to put them on to a main stage with worldwide known dance group Diversity is fantastic, this shows people from Caithness what can be achieved and we are all about at Rush.dance."

Rush.dance have just competed at UDO Central Scotland street dance championships in Perth, this is the first Qualifier for next year's World street dance championships.   Thousands of dancers from all over Scotland came all hoping to make a final and qualify for next year’s big one ‘the World championships’ Solo’s U6 Open, Erna Thain *Runner up* (she is only 3 years old and competing against kids up to age 5+ just shows how fantastic this little worker has done) U8 Novice, Troy Giles *WINNER* and new Scottish Central champion, Ava Cook 4th place.
[Dance Tutors]
6/7/2015

Rush.dance kids came out on top at the massive Scottish street dance competition - MAD STREET DANCE in Motherwell The competition is the 2nd biggest in Scotland with all the very best street dancers competing.   Results on the day - Solo sections, U10 Advanced Solo , Chloe MacGregor *Runner up* Chloe danced in the elite section to become 2nd best U10 street dancer in Scotland was such a fantastic achievement.
[Dance Tutors]
13/4/2015

Rush.dance comp kids have just competed at MJN promotions Hip Hop competition in Grangemouth.   As you can see in the picture the kids had an awesome time and also came home with a big haul of trophies after winning many sections on the day.