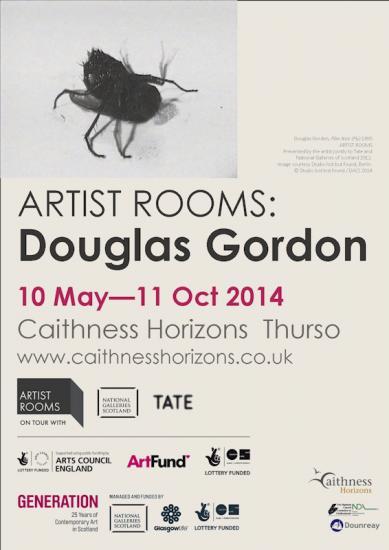 An exhibition of work by the internationally acclaimed, Turner-Prize winning artist Douglas Gordon takes place at Caithness Horizons in Thurso. The works on show – which include three video installations and one text piece – have been presented by Douglas Gordon to the ARTIST ROOMS collection, and are being shown for the first time since their acquisition.

This exhibition also forms part of GENERATION, a national programme taking place in the summer of 2014, which celebrates the wealth of contemporary art that has developed in Scotland over the last 25 years. Over 60 venues across the country are participating in this unique programme.

Among the works on show in Caithness is Gordon’s elegant, iconic 1996 video installation A Divided Self I and II, in which two arms, apparently belonging to two people, one hairy and the other smooth, are seen wrestling with one another. In fact the arms belong to the same person - the artist - who evokes by the simplest means a powerful internal struggle, in which the hairy arm appears to represent evil and the smooth arm good.

The Caithness exhibition also features another of Douglas Gordon’s most memorable early video pieces, Film Noir (1995), as well as a more recent text piece I am the curator of my own misery (2010). All four works on show were donated by Gordon to ARTIST ROOMS in 2012, and are being shown as part of the collection for the first time.

Caithness Horizons are running an education programme offering opportunities for visitors of all ages to engage with the exhibition in innovative and responsive ways. The programme includes a three-day workshop for children aged 7-14 led by contemporary artist Lucy Harrison, a programme for schools and a family day led by Scottish contemporary artist Kenny Hunter. This includes a talk on Gordon’s work and a trip to see Hunter’s work, The Unknown located in Borgie Forest.

ARTIST ROOMS On Tour is a partnership with Arts Council England and the Art Fund, making available the ARTIST ROOMS collection of international contemporary art to galleries throughout the UK.

the Edge dance studio showcase is a massive success

The Edge Dance Studio in Thurso marked its 6 month opening with showcase performance at Mount Pleasant school on the 17th of December infront of a sell out crowd.  Around 100 studio members, (kids from the age of 2 right up to adults) performed on the night, showcasing 11 different dance styles.