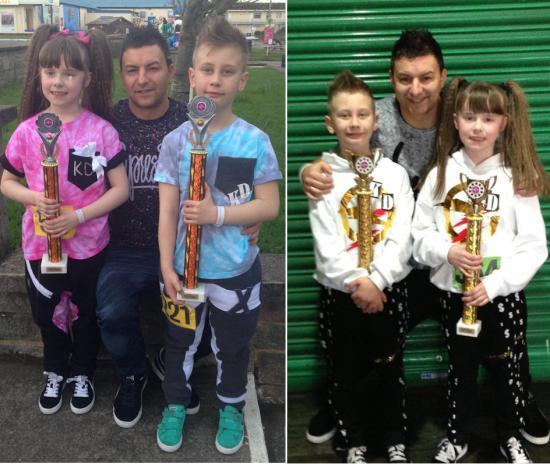 Willie Miller of Rush.dance reports on the latest wins.

Two of my Rush.dance kids Chloe MacGregor and Tyler Hutton (both from Wick) have just competed at dancelines Euro dance International championships in Brean, This competition was run over the weekend with dance styles going on Freestyle, slow dance, show dance and Hip Hop sections.

Chloe danced in the Open U8 Hip Hop Championship section, which she dance on Saturday in her way to the final and coming away with an amazing (2nd place) Runner up place.

Tyler danced in the Open U10 Hip Hop Championship section, which he danced on Saturday on his way to the final and he became U10 Dance lines International Hip Hop Champion coming in 1st place. Tyler has now won this amazing title as Euro dance Hip Hop champion for the second year running.

Both kids once they made their finals has to dance-on on their own in front of the judges and everyone in the hall. Both kids smashed their dance-on which was fantastic for us as teachers, making myself & Rebecca Miller very proud of them.

Saturday night was the International team match which team Scotland dances off against teams from England, Ireland, Northern Ireland, Wales and Norway. On the night Tyler Hutton dance in the U12 Hip Hop section, Willie Miller dance in the Overs Hip Hop section and Rebecca Miller / Chloe Macgregor both danced in the Open Hip Hop pairs section. There were also other dance styles going on to complete the dance off.

At the end of the night Scotland Won the International team match which again it was a massive achievement. Myself and our Rush.dance were buzzing after competing against the best dancers in each country.

Both kids then competed in U10 Hip Hop pairs section on the Sunday, The kids dance all the way to a hard final and both came out on top Winning 1st place in the U10 Euro dance International Hip Hop championship titles.

Rush.dance have just competed at UDO Central Scotland street dance championships in Perth, this is the first Qualifier for next year's World street dance championships.   Thousands of dancers from all over Scotland came all hoping to make a final and qualify for next year’s big one ‘the World championships’ Solo’s U6 Open, Erna Thain *Runner up* (she is only 3 years old and competing against kids up to age 5+ just shows how fantastic this little worker has done) U8 Novice, Troy Giles *WINNER* and new Scottish Central champion, Ava Cook 4th place.
[Dance Tutors]
8/8/2015

Rush.dance kids came out on top at the massive Scottish street dance competition - MAD STREET DANCE in Motherwell The competition is the 2nd biggest in Scotland with all the very best street dancers competing.   Results on the day - Solo sections, U10 Advanced Solo , Chloe MacGregor *Runner up* Chloe danced in the elite section to become 2nd best U10 street dancer in Scotland was such a fantastic achievement.