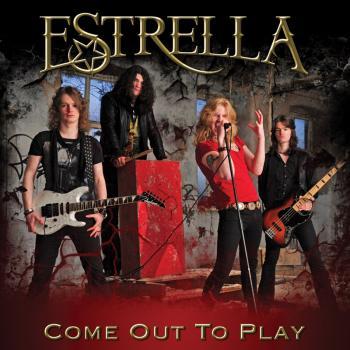 Bio
Highland rock band ESTRELLA'S sound is primarily 70/80s infused rock - think Bon Jovi, Def Leppard and Aerosmith - awash with melody and riffs, thunderous beats and anthemic choruses - all the ingredients of a fresh new rock sound for today! Jim Gellatly, Amazing Radio & In:Demand Uncut Presenter, after seeing Estrella play at Edinburgh's Hard Rock Café, says "Estrella gave a stadium like performance in a small venue, they know how to entertain!" With big hair, big riffs and killer tunes - ESTRELLA - does what it says on the tin - PLAYS ROCK - something for everyone!

Highland Rock Band, ESTRELLA are set to play an acoustic gig on the WORLD'S shortest street on Friday 22 June.   The Guinness Book of World Records declared Wick's Ebenezer Place (in the far North of Scotland) as the world's shortest street in 2006 and the band will play a 15 minute set outside its only address, No 1 Bistro, Mackay's Hotel but at 6ft 9 inches in length there is no room for another building in this street! Murray Lamont of Mackay's Hotel said "We are delighted that Estrella has chosen to play a gig outside one of the county's most historical landmarks.
[]
30/3/2012

Highland rock band, ESTRELLA, is destined to make big waves in the coming months with the release of their debut album - "Come Out To Play" - on 21 May 2012.   An exciting time for these full time musicians, who are set to play a handful of Scottish dates, before heading out on a full UK tour in May/June.
[]
13/5/2006

It is the way of musical talent across the globe that most people who are successful need to move on to find success.  The guys in Estrella whose roots are deep in Caithness have moved with success pulling them away.
[]
17/7/2005

Belladrum Tartan Heart Festival has announced 'Pulse' - a talent trawl for emerging bands and soloists throughout the Highlands, in association with Mad Hatters at Hootannany's and HUBL, the web site for Highland musicians.   A series of selection events will be around the Highlands - Inverness, Dingwall, Nairn, Alness, Thurso, Skye and Oban, culminating in a final selection in Mad Hatter's, Inverness in July.