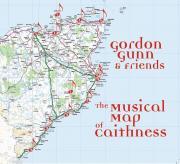 The Musical Map of Caithness produced by local musician Gordon Gunn and friends in 2015 has proved a huge hit with local sand visitors.   Gordon said, We had a terrific response last summer and now we are restocked and gearing up for summer tourists so folk are are using it as their musical tour guide and from hotel responses some are staying the extra night due to the visitor attractions on the album and wanting to go and visit.
[Professional Musicians]
20/6/2012

Highland Rock Band, ESTRELLA are set to play an acoustic gig on the WORLD'S shortest street on Friday 22 June.   The Guinness Book of World Records declared Wick's Ebenezer Place (in the far North of Scotland) as the world's shortest street in 2006 and the band will play a 15 minute set outside its only address, No 1 Bistro, Mackay's Hotel but at 6ft 9 inches in length there is no room for another building in this street! Murray Lamont of Mackay's Hotel said "We are delighted that Estrella has chosen to play a gig outside one of the county's most historical landmarks.
[Professional Music Tutors]
9/4/2012

Fiddle tuition is now available worldwide via Skype with Session A9 fiddler Gordon Gunn.   Gordon is a much in demand fiddle tutor having taught all over the UK, USA & Canada and is currently one of the tutors on the NC course at the National Centre Of Excellence In Traditional Music in Plockton.
[Professional Musicians]
30/3/2012

Highland rock band, ESTRELLA, is destined to make big waves in the coming months with the release of their debut album - "Come Out To Play" - on 21 May 2012.   An exciting time for these full time musicians, who are set to play a handful of Scottish dates, before heading out on a full UK tour in May/June.
[Professional Musicians]
30/8/2007

After a fantastic and eclectic semi final in Dundee's best live venue Fat Sams on August 24th - with performances from Black Velveteens, Liquid Blue, Callel, Peski Kings, Whale Engineering, a special set from The Electrolites and Barry Greig's recitals of his self-penned poetry - this year's Best Band Competition finalists were announced.   Local Caithness band Liquid Blue has made it into the final of The Ultimate Chill Best Band Competition 2007.
[Professional Musicians]
27/5/2006

Quayside formed during the summer of 2005.  Margaret MacDonald, who has sung locally for a number of years, and Bob Turner, who plays guitar, teamed up to provide support to a charity concert in the Wick Youth Club.
[Professional Musicians]
16/5/2006

Clapshot's next public appearance will be on Friday evening, 26th May at the Park Hotel, Thurso.  This will be an informal evening of various types of music in the bar, and anyone wishing to come and join in to make this a session is welcome.
[Professional Musicians]
13/5/2006

The Howlin Gaels new CD has been written and compiled with all the usual love for their music that has made them one of the top blues/rock bands in Scotland.   With an incredible playing experience behind them with the ability to play almost anything they have over the years wowed audiences wherever they went.
[Professional Musicians]
18/3/2006

It is the way of musical talent across the globe that most people who are successful need to move on to find success.  The guys in Estrella whose roots are deep in Caithness have moved with success pulling them away.