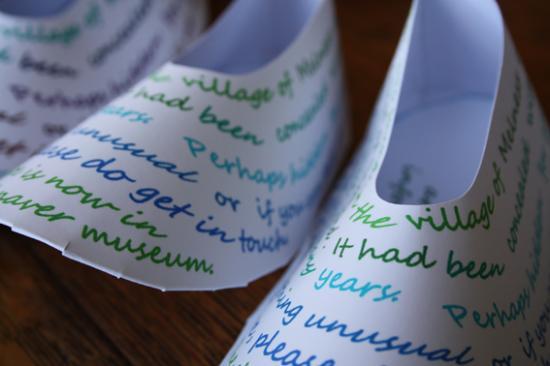 Have you had a closer look at your local café's table decorations or at what else may be on the shelves in your shop lately? If you live on the north coast of Scotland, it might be worth a look, as Strathnaver Museum's artist-in-residence, Joanne B Kaar, has been inspired to make 200 paper shoes and hide them in mail boxes and public places from Balnakeil to John O'Groats. She made the shoe drop last week.

Overwhelmed with objects and stories in Strathnaver Museum, Joanne decided to find out more on the objects which remain a mystery 40 years after they were donated to the museum. A ladies shoe and dogskin buoy were donated to the museum in the 1970's, they had been concealed within the walls of a house in Melness along with a whisky bottle (which no longer exists). That's all that is known.

Joanne has since discovered there is a 'directory of concealed shoes' at the museum in Northampton. Northampton was known for it's shoe manufacturing. They have over 1500 shoes in the 'directory of concealed shoes', and the Melness one isn't one of them. Joanne is gathering as much information as she can, to add the Melness shoe. They were apparently concealed in buildings as good luck tokens or to ward off evil spirits, a practice done in secret an not talked about, which makes research difficult. They are usually discovered when a house is being renovated or knocked down.

Each of Joanne's paper shoes contains information about the Melness shoe and also asks if you know any more about it or if you have ever found anything unusual concealed within walls, to get in touch. Joanne has already and a few interesting e-mails from finders of paper shoes and hopes that you might be intrigued enough to visit Strathnaver Museum and see the real one. She admits it's also quite fun, trying to leave paper shoes in public places without being seen! Finders keepers.

Joanne has more paper shoe fun planned for workshops with Tongue Primary school later this month, and at Tongue village hall in August when Strathnaver Museum will host one of their 'road-shows'.

Joanne is one of 5 artist working at Strathnaver Museum during 2012, the project "To increase heritage knowledge and involve people in development of heritage awareness through improvement of the Museums resources" is being part financed by the Scottish Government and the European Community Highland LEADER 2007-13 programme, and the Heritage Lottery supported by Comunn na Gŕidhlig Highlands and Islands Enterprise and CVS North.

The other artists are; Déirdre Ní Mhathúna, Liz Myhill, Will Sadler, and Lorraine Robson. You can follow their progress during 2012 on their collaborative artists' blog: www.strathnaver.blogspot.co.uk