Splinters Productions in "The Matchmaker" At Lyth 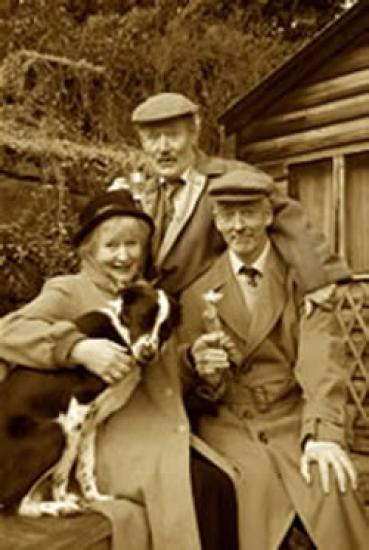 On their last visit to Lyth this delightful trio of accomplished Scottish actors brought us George Mackay Brown's memorable work "For The Islands I Sing". Now they're back with the rollicking Irish comedy "The Matchmaker" and its cast of improbable characters, all in search of love. Artist Joyce Gunn Cairns, MBE described the production as "The most moving, the most hilarious and the most engaging piece of theatre I have seen in a long time."

Splinters got its title from the Russian word "Oskolki" - the title of a humorous magazine to which Anton Chekhov contributed numerous comic stories when a young medical student in Moscow. In 1996, John Shedden devised a show for Prime Productions around these Chekhovian tales and called this show "Splinters" - "with Shedden and McLean, the double-take becomes an art-form - Laurel and Hardy meets Freud" (The Scotsman).

The following year, John Shedden and colleague Finlay McLean decided to found their own theatre company and to retain the name. During the late 90s, Splinters Productions successfully toured quality drama to small and medium scale venues around Scotland so that by the year 2000 the company was invited to bring their repertoire of plays including Compton MacKenzie's classic "Whisky Galore" and the tribute to Robert Louis Stevenson "The Laird of Samoa" to Pitlochry Festival Theatre.

In 2002, John and Finlay were joined by Anna Hepburn and Donald Smith (Director of the Scottish Storytelling Centre). Since then the company has had a string of successes and received numerous excellent reviews on their Scottish tours - "a well-crafted script backed up by powerful acting - it is a wonderful advertisement for the English language and a tribute to good, old fashioned acting values" (Perth Evening Telegraph), "The ensemble playing of the company of actors set a rare standard - the magic of the storytelling enthrals all" (The Orcadian).

Their latest touring production, "The Matchmaker" by J B Keane (Adapted by Literary Director - Donald Smith) premiered at the Scottish Story Telling Centre in April 2011 and returned there during the Edinburgh Festival Fringe that year.