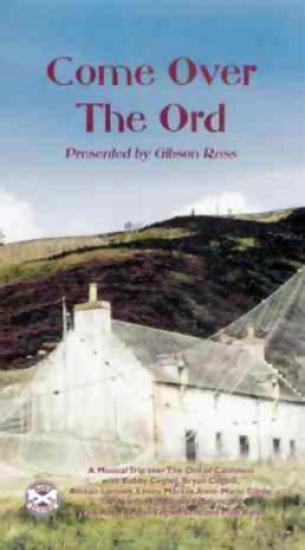 This video is one of 19 own label videos which form part of the extensive range of Scottish traditional music recordings on the Ross Records label owned by Gibson and Ann Ross. There is a strong Caithness connection as Gibson was born and brought up in Wick, and attended both Wick North and Wick High schools before going to Heriot Watt University in Edinburgh to study pharmacy. Ann also was a pupil at Wick High, having come to the town from the Black Isle when her father, the late Don Mclaren was appointed manager of the local branch of The Bank of Scotland.

Gibson and Ann still run their pharmacy in Turriff, Aberdeenshire as well as the music operation Ross Records, which involves audio recordings and the production of videos for sale at home and abroad. COME OVER THE ORD was filmed during the summer of 2002 and the locations show much of the best of the Caithness scenery covering most areas of the county including Wick, Thurso, John O'Groats, Dunbeath, Dunnett and the old Clearances settlement of Badbea just north of The Ord.

Taking part in the video are Wick RBLS Scotland Pipe Band led by Pipe Major Bobby Coghill who also features prominently playing fiddle, accordion and the pipes on various tracks as well as with The North Highland Fiddlers. Bobby's son Bryan, as well as playing the accordion, also sings the song that gives the video its title "Come Over The Ord" written by Wick man Donald Sutherland. There are also three other songs from Lesley MacKay and Alistair Lamont. Alistair sings his own composition, the very popular "Ackergill Shore" (at where else but Ackergill). Anne-Marie Gilroy dances "The Highland Fling" and "Seann Triubhas" in Pulteney Distillery to compete the entertainment.

The video, one of three new releases from Ross Records is available locally from The Music Shops in Wick and Thurso, John O'Groats Crafts, DR Simpson, Wick and from Wick RBLS Pipe Band. Ross Records can also supply the video post free to any UK address. Tel 01888 568899