The !GUBI Family At The Mill Theatre 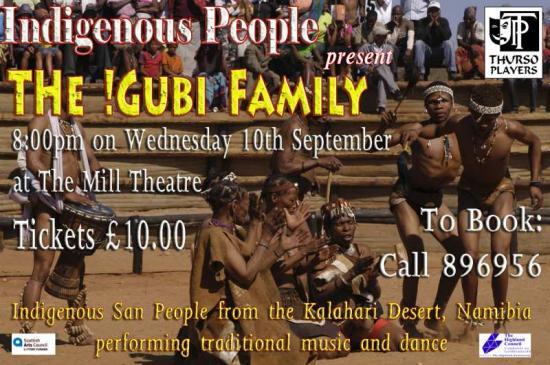 The !gubi Family are a true family of 6 San musicians, ranging in age from 18 to 80, and are the keepers of a vanishing tradition of San Musical Culture. Their home is Corridor 18, in the Sands of the Kalahari Desert, Namibia. The San are the originators of trance dance and their music is specifically designed to evoke an altered state of consciousness through the rhythms and beats, enabling the musician to enter trance and perform healing on both individuals and the tribe. They traditionally sing and dance throughout the night playing the mouthbow, the mbira and the zuma (four-stringed instrument). The music of this family has captivated the ear of top international artists. Most notably was their collaboration with Pops Mohammed, and Zena Williams, who worked with the elders of the family to produce his internationally acclaimed album, SanScapes.

With over 10,000 years of ancestry and knowledge, the San of the Kalahari represent one of the oldest surviving indigenous cultures in the world. Shaped by the sands and wildlife of the desert, the San, or 'Bushmen', have maintained a traditional hunter gathering culture through their intimate relationship with nature. This has continued a unique knowledge of planet-medicine, healing, hunting and living into the 21st century.

As with many indigenous cultures, the San have faced challenges brought on by development, losing their ancestral lands and human-rights in a modern world fuelled by domination and control. Rather than aid, the San need the opportunity to choose their own destinies, to have autonomy and protection, and for people to understand the importance of their special culture.

In August - September the !Gubi family are touring Britain sponsored by Air Namibia, and supported by UK based NGO, Indigenous People. Indigenous people is an organization endorsing the culture, art, music and dance of excluded, indigenous minorities. They seek to empower disadvantaged indigenous communities to harness the economic potential of their culture by marketing and managing musical tours around the UK and Europe. They facilitate and promote indigenous led economic, social and cultural development for local communities. Their long term goal is to raise awareness of the !Gubi Family and their wider community's plight, in order to raise subsequent funds to set up a sustainable development project for the community back in Namibia.

Through enchanting traditional music, and dance, the !Gubi family provide a voice of wisdom , one proud of their ancient culture and ancestry. For British communities, it is a fantastic opportunity to be enlightened by a traditional culture, struggling to adjust to global culture and politics, yet vibrant with an understanding of human existence. With many such cultures teetering on the brink of extinction or self-destruction, developing our own awareness of these would benefit not only our own perspective of how we live, but also the future of our planet.

It is hoped that support and promotion through this tour will raise the funds to contribute towards preventing the loss of communities offering so much spiritual and environmental knowledge to our troubled, post--industrial world.

Waves tells the story of the unofficial history of the invention of the Butterfly stroke.  It is a solo theatre work written and performed by Alice Mary Cooper.
[]
11/10/2014

Head In The Clouds - Fun for Small Children

Do you enjoy a good thriller? - Then Head For Mill Theatre 14th May

Do you enjoy a good thriller? Are you a fan of those Nordic Noir Books, such as The Girl with the Dragon Tattoo, or TV Series such as the Killing? Do you like good comedy? Do you enjoy a good night out? Do you enjoy a night at the Theatre? If you have answered yes to one, several, or all of the above, please come and see Inspector Norse at the Mill Theatre Thurso on Wednesday 14th May.   Tickets are available priced ÂŁ8, ÂŁ6 Concession, from Caithness Horizons.
[]
8/9/2013

The Witches by Roald Dahl

THIRD ROUND OF SMALL GRANTS ANNOUNCED BY THE THEATRES TRUST The Theatres Trust is pleased to announce its third round of small capital grants to theatres across the nation, including one of the smallest theatres in the UK - the Tom Thumb Theatre in Margate - and the most northerly theatre in the mainland - the Mill Theatre in Thurso.   This current round of grants provides assistance to five local and community-based theatres across the UK.
[]
17/3/2013

Out Of Sight Out Of Murder

Thurso Players present Out Of Sight Out Of Murder at the Mill Theatre.   21st, 22nd, 23rd March.