Meeting To Explore Community Development Of Viewfirth Site In Thurso 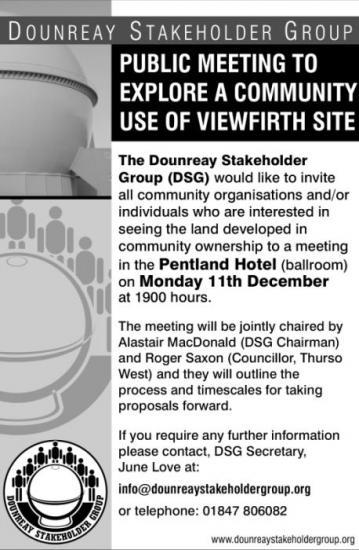 The Dounreay Stakeholder Group (DSG) is to hold a public meeting for anyone interested in the redevelopment of the Viewfirth site in Thurso under community ownership.

The three-acre site currently forms part of the Dounreay estate and until earlier this year was occupied by the Dounreay Sports and Social Club.

Structural problems in the former club building mean that the property will be demolished.

The Nuclear Decommissioning Authority (NDA) will consider donating the land to the community if a worthwhile socio-economic project can be identified. As a first step the DSG has been asked to gauge interest in the transfer of the land to a community development.

The DSG has set up a project team to canvas interest in the community and assess any proposals that come forward.

The first stage is to hold a public meeting on Monday 11th December for interested parties and to set out the process and timetable.

The meeting will be chaired jointly by Alastair MacDonald, chairman of the stakeholder group and Councillor Roger Saxon, member of the Highland Council for Thurso West.

Alastair MacDonald said "This is a great opportunity for organisations to work together to benefit the whole community. The public meeting is the first stage and will set out the process to be adopted. We hope to see a lot of genuine interest and joined up thinking to ensure any proposal brought forward will be successful in the long term."

Roger Saxon said "This is the chance for the community to replace Viewfirth with something worthy of those nuclear pioneers who had so much fun on this site. I know some groups are already considering this and my hope is that they can all get together and agree on a project in the true spirit of community planning. Whatever project is
chosen will have to demonstrate a genuine community need and have a sound, sustainable business case to attract the support of funding organisations."

The meeting takes place in the Pentland Hotel (Ballroom), Thurso at 7.00pm on Monday 11th December 2006.