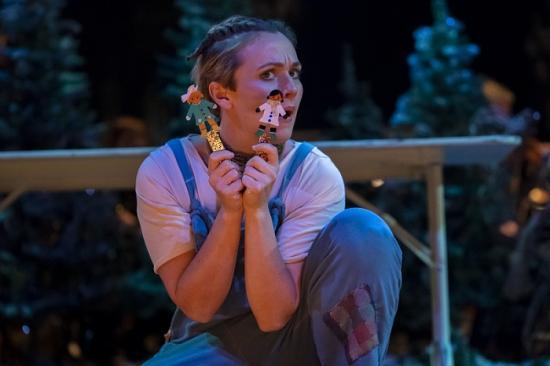 Scottish Opera premieres Humperdinck's enchanting Hansel and Gretel in the latest Scottish Opera: On Screen, filmed at Glasgow's Theatre Royal on 19 December. The whole family can immerse themselves in this modern adaptation of the classic fairy tale from Wednesday 10 February at 6pm, via the Scottish Opera website. Before then, BBC Radio Scotland will feature audio excerpts from the performance as part of Classics Unwrapped, presented by Jamie MacDougall, on 7 February.

Sung in English, with staging by Daisy Evans, this vivid and joyful reimagining of Humperdinck's opera tells the heart-warming story of two children and their journey from an impoverished home, into the mystery and danger of the woods. Brought to life by Daisy's unique staging, with a Christmas-crazed witch and a shopping trolley full of sugary sweets and garish goodies, Hansel and Gretel seem a long way from their simple family life. Packed full of charm and sparkle this production is an ideal anytime treat for children and adults alike, sure to lift spirits and transport audiences from behind the screen to a world of hope and wonder. Although Hansel and Gretel is an opera traditionally associated with Christmas, Daisy's new production celebrates the opera's joy and hope that are just as powerful and relevant whatever the season.

David Parry conducts a cast including Kathleen Ferrier Award-winner Kitty Whately as Hansel, Rhian Lois (La bohème 2020) as Gretel, ENO Harewood Artist Nadine Benjamin as Mother and The Witch, Phillip Rhodes as Father and former Scottish Opera Emerging Artist Charlie Drummond (Così fan tutte, 2020) as The Sandman and The Dew Fairy, in a translation by David Pountney and with a reduced orchestration by Derek Clark. Humperdinck's chorus of gingerbread children is performed by a chorus of four adults.

Daisy Evans said: ‘This show is fun for all the family, bright colours, big energy and plenty of glitter! With the current pandemic, everybody has had a difficult Christmas, so I wanted it to be about finding joy where we can, and about families celebrating together. And I also want it to encourage people to come back to the theatre, and to bring their children with them - to make them want to be part of this experience, and to invest in it as part of our culture.'

Scottish Opera's Head of Music, Derek Clark said: ‘Despite a prolific composing career, Humperdinck's reputation rests solely on this one opera. The combination of a straightforward fairy tale with a musical language which owes a heavy debt to Wagner may seem an unlikely one, but in Hansel and Gretel, the mixture of simple tunes, like the famous Dance duet, thrilling orchestral passages such as the Witch's Ride and the Dream pantomime, and the tender emotion of the children's Evening Prayer produces a masterpiece which has kept its popularity for well over a century.'

Find out more about Daisy Evans staging of Humperdinck’s fairy tale opera in an exclusive interview:

Mother and The Witch Nadine Benjamin

The Sandman and The Dew Fairy Charlie Drummond

The Company’s Opera on Screen productions are available to watch at www.scottishopera.org.uk/what-s-on/opera-on-screen/

The collection includes, Mozart’s Così fan tutte, Opera Highlights, Janáček’s The Diary of One Who Disappeared, Menotti’s The Telephone and Samuel Bordoli and Jenni Fagan’s The Narcissistic Fish.