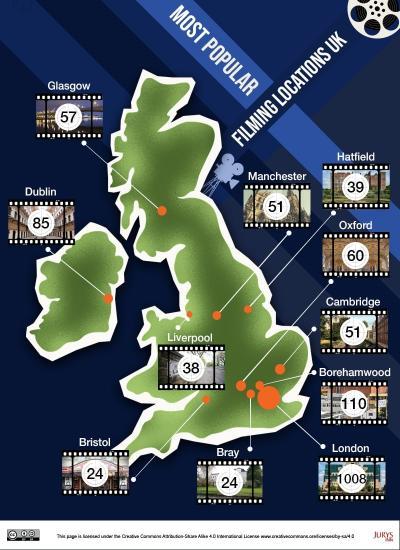 While CGI allows filmmakers to create incredible, lifelike locattions using the latest technology, sometimes you just can't beat the real thing! But which locations are directors returning to time after time?

Jurys Inn have analysed over 5,000 IMDb entries, splitting the data out by city-level, to reveal the UK's most popular filming locations.

Perhaps unsurprisingly, London comes out on top, with 1,008 movies and TV shows listing the UK's capital city as a filming location. However, when you dig a little deeper into some of the movies and TV shows which were filmed in London, there are some interesting entries.

For example, London's South Bank has been featured in a number of films in the James Bond franchise, but did you know that scenes from Batman Begins, Rogue One: A Star Wars Story and Les Miserables were also filmed in London?

The second most popular filming location was the small, Hertfordshire town of Borehamwood. The small commuter town is home to the famous Elstree Studios, which has played host to a whole host of Hollywood blockbusters, from Kick-Ass and The Shining to Indiana Jones and The Hitchhiker's Guide to the Galaxy!

Dublin came in third, with 85 different films and TV shows having filmed there. One of the most popular locations in Dublin was the Kilmainham Gaol Museum, which has been featured on films such as The Italian Job and Paddington 2.

Head over to the Jurys Inn website to see the full list and discover the surprising locations where some of your favourite movies may have been filmed - https://www.jurysinns.com/blog/posts/most-popular-uk-filming-destinations