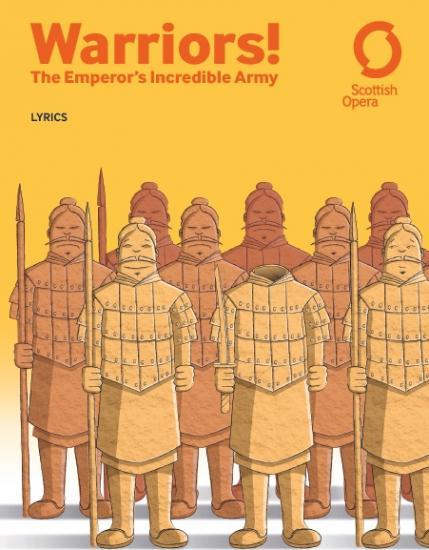 In Spring and Summer 2020, thousands of primary school children across Scotland will perform Warriors! The Emperor's Incredible Army as part of the Scottish Opera Primary Schools Tour. Pupils in primary 5, 6 and 7 will rehearse and perform this opera, which recounts the tale of the terracotta warriors of Xian.

It begins on Monday 13 January at Milngavie Primary School, and will visit over 50 schools around Scotland during the Spring term, including in Glasgow, Edinburgh, East and West Dunbartonshire, Clackmannanshire, North and South Lanarkshire, Angus, Aberdeen, Fife, Moray, Falkirk, East Lothian, the Highlands and Dumfries and Galloway. (Full list of participating schools below.)

Warriors! tells the true story of Qin Shi Huang, the first Emperor of China, who was determined to cheat death and rule over his country forever. Over many years, Qin Shi Huang assembled an army of 8000 soldiers, horses and chariots to watch over him in the afterlife. The warriors were all armed to the teeth, but made entirely of clay.

Composed by Alan Penman with lyrics by Ross Stenhouse, pupils learn the opera's words and songs in their own classrooms and are then helped by the Scottish Opera team to prepare for a performance in front of pupils, friends and family. It allows them to learn in an exciting, creative and challenging way, further developing their music education. Performing in front of an audience instils a confidence that will continue to help pupils in the future, whatever path they follow. Teachers from schools which have already taken part agreed that the Primary Schools Tour broadened the children's cultural experiences, improved team work skills, increased cultural confidence as well as singing ability, and supported the aims of Curriculum for Excellence.

Between January and November 2019, 132 Scottish schools took part in in the Primary Schools Tour, which was established by Scottish Opera 48 years ago. Teachers are provided with high quality teaching resources, including a support pack to help introduce the music and related activities, an advance visit from a specialist choral musician, and a day-long workshop with a team of experience arts educations specialists and performers.

Warriors! was originally commissioned in 2015 in partnership with the five Scottish Confucius Institutes based in the Universities of Edinburgh, Strathclyde, Glasgow, Heriot-Watt and Aberdeen. In 2016, around 200 pupils from the Fangcaodi International School, Beijing learnt the songs and performed the opera, which is mainly sung in English with some words in Mandarin. The ‘pilot' visit was deemed such a success by the teachers that Scottish Opera was invited to return and work with a cast of pupils nearly four times larger.

In October 2019, three singers from Scottish Opera returned to China, and with around 200 pupils from the Kunming Fangcaodi International School learned and performed our second opera based on Chinese history, The Dragon of the Western Seas, which tells the story of Kunming's most famous citizen, Admiral Zheng He.

Scottish Opera's Director of Outreach and Education, Jane Davidson said: ‘Our annual Primary Schools Tour is one of the longest established programmes at Scottish Opera - every year over 9,000 children across Scotland take part in these performances with many more thousands of friends and families coming to see them in action.

‘We continue our work with the Confucius Institute for Scotland's Schools (CISS), bringing back Warriors! The Emperor's Incredible Army, which tells an important story from China's history. Pupils get to exercise their creative muscles and experience the added confidence and excitement that comes from performing for an audience of their peers, family and friends.'

In 2018 Scottish Opera was granted Confucius Classroom Hub status by Hanban, the headquarters of Confucius Institutes worldwide, making it the first opera company in the world to be selected for this accolade. It is one of four hubs based outwith a school setting; the others are the Royal Conservatoire of Scotland, the Scottish Schools Football Association and the Royal Zoological Society at Edinburgh Zoo. The ‘classroom’ at the Company’s Edington Street production studios, holds resources on Chinese performance, arts and culture. It is used as a rehearsal space for Chinese-related programmes.

Confucius Classrooms are hubs usually based in schools and serving the local community. The concept promotes joint planning of cultural activities, sharing ideas and resources to stimulate the learning and teaching of Chinese language and culture.

More details about Warriors! are available from www.scottishopera.org.uk/join-in/opera-for-schools/

All hail Qin Shi Huang - the first Emperor of China, destined to rule his Empire forever. After all, didn’t he drink the Elixir of Life, a potion that promises immortality? Not such a great promise when that elixir turns out to be a deadly poison. Now the afterlife awaits, but even a dead Emperor needs an army. So, over many years, he’s gathered a vast hoard to watch over him after death - 8,000 soldiers, horses and chariots, all armoured and armed to the teeth. And every one of them moulded from clay...