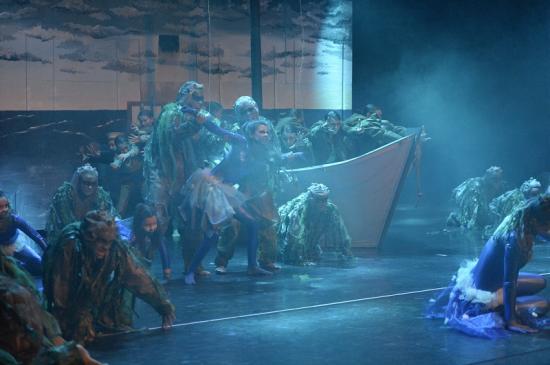 The results are in from the Highlands 2019 Rock Challenge

August 6th, 1945 - Collateral damage; when 100,000 lives end from one bomb. What do we call the poisonous radiation that effects generations? Hiroshima is chosen - a dot, on a map, on a table, thousands of miles away. As a young American is also caught in the blast with his love, can we not ask how self-destructive warfare is, on our shared world?

Iolaire - 1919. The HMY Iolaire was returning war heroes to Lewis on New Year's Day. During the voyage, the ship struck the infamous rocks 'The Beasts of Holm.' The boat was torn apart and sank. Those that survived clung to masts and ropes to endure the night. More than 200 people drowned, just yards from their home. We will remember them.

When the bravest soldiers die on earth,

The clouds part and the Valkyrie come to earth.

Their Armour creates the Northern Lights, that shines and moves as they take flight,

Along the Bi-frost bridge to Valhalla they go,

To defend Odin against a mortal foe.

Enemy sprung from his own home,

Wants to end his world and take his throne.

The event at Eden Court attracted a large audience and was supported by a number of special guests and sponsors. Attending the evening were a panel of expert judges.

Iain Stewart, Chief Executive of NHS Highland, second place prize presenter: ‘it's been an amazing evening here at Eden Court. I was really impressed with the quality of the dancing, the story telling and the confidence of the children when they were on stage but also when they were talking about their performances and what they gained from them. Really good night, well done to all the children who took part'

PHOTO - A scene from the Thurso High performance at Eden court In Inverness on 1st April 2019.

Originating in Australia, Global Rock Challenge events have been staged since 1988 in 120 locations throughout; Australia, New Zealand, Japan, United Kingdom, South Africa, Germany and United Arab Emirates, with over 1 million participants globally. The Rock Challenge was introduced to the United Kingdom in 1996 by Hampshire Constabulary with the aim to help young people enjoy school and live pro-active and positive lifestyles free of tobacco, alcohol, and other drugs.

The Rock Challenge is universally inclusive with secondary schools, colleges, academies, schools catering for students with special needs and independent schools from all backgrounds taking part. Due to the popularity of the initiative the junior version, J Rock, for young people aged 7-11, was also introduced to the UK and in 2019 enters its 15th year.

These benefits are evidenced in the questionnaires completed by students and teachers throughout our 2018 tour. 5001 out of 6122 J Rock respondents reported that they had made new friends through the initiative, with 93% of students reporting that J Rock had improved their relationships with teachers. Relations were also improved for Rock Challenge participants, 6512 of 8909 students felt they had improved relationships with teachers, 89% reported they had made new friends through Rock Challenge, and 93% felt their teamwork skills had improved as a result. Of the Rock Challenge respondents, 7,865 felt their self-esteem had improved, with 93% of teachers also reporting that they felt their student's self- esteem had improved. 34% of responding J Rock and Rock Challenge® teachers felt that anti- social behaviour had decreased at their school; and, as is the aim of the event, a fantastic 89% of teachers believed that Rock Challenge had allowed their students to achieve a ‘natural high' through performing, instead of using drugs, alcohol, or tobacco.

The competitions are professionally produced events held in major theatre venues across the United Kingdom. Schools will spend the day rehearsing in front of their peers and supporting one another before performing their 5-8 minute dance, drama and design piece to a live audience of friends, family, VIP guests and a panel of judges. Marked in three criteria areas- production, design and performance- schools are presented on stage at the end of the evening show with Awards of Excellence in a variety of areas. The top placing teams are also announced and qualify through to a regional final where they are invited to compete with other winners from across the country.

As the standard of productions have improved year on year a ‘Northern Premier' and ‘Southern Premier' Division have also been developed to allow teams reaching a high level of achievement to compete against teams of a similar standard. These ‘Premier Teams’ showcase at local events before competing in their respective final.

Scottish Fire and Rescue Service Award of Excellence for Stage Use

Securigroup Award of Excellence for Set Design and Function

Be Your Best Foundation Award for Student Leadership

Be Your Best Foundation Award for Positive Inclusion