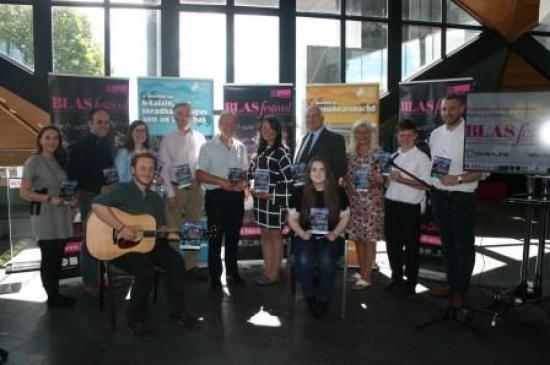 Blas, which means ‘taste' or ‘sample', is organised by Fèisean nan Gàidheal in partnership with The Highland Council and will take place from 7-15th September. It aims to celebrate Gaelic culture and the thriving Scottish traditional music scene over nine days of concerts, cèilidhs and larger events in venues across the Highlands and Islands. Blas has introduced some exciting opportunities for young people to design and deliver some of the main events at this year’s festival, supported by the Year of Young People 2018 event fund, managed by EventScotland, part of VistScotland’s Events Directorate. The programme for this year’s Blas Festival was launched today and revealed an outstanding line up of musicians from Scotland and further afield as well as some exciting opportunities for budding young musicians and composers.

Two icons of Gaelic culture, Alasdair Gillies and Dolina Maclennan, will be celebrating their 80th birthdays with special events in Skye and Lewis featuring hand-picked artistes. And as Runrig embark on their Final Mile, Trail West will celebrate 40 years since the release of the band’s ground-breaking Play Gaelic, playing the songs from that album at two concerts during the festival.

Although young people have always featured in Blas, in this Year of Young People the festival will do more than ever to showcase the wealth of talent amongst Highland youngsters. Up and coming young musicians will feature in the majority of events and young people will gain invaluable marketing and event management experience through their key role in the organisation and promotion of this year’s festival which will be a major celebration of young people.

Following a Ceòl nam Fèis showcase concert at the Spa Pavilion in Strathpeffer on Friday 14 September, Blas will culminate in an enormous concert at the Northern Meeting Park in Inverness on Saturday 15th; Òran Mòr meaning Great (or Big) Song, will feature over 1,000 young musicians from Fèisean across Scotland as well as various youth music groups and initiatives including the Highland Council Youth Music Groups and the National Centre of Excellence in Traditional Music. The talented youngsters will take to the stage with the bands they have chosen including traditional music supergroups Skipinnish, Trail West and Breabach along with Brìghde Chaimbeul. A new Gaelic song written by Glasgow-based Gaelic student, Robbie MacLeòid, will be performed by every single musician taking part in the concert, the largest event Fèisean nan Gàidheal will have organised in its 30-year history.

One of the Blas Festival’s youth ambassadors, Lachie Robinson, said: "It is great to be involved in putting together this year’s Blas Festival and to have such an exciting programme to look forward to with some of the acts most admired by young people involved in playing traditional music. Òran Mòr is going to be awesome and myself and my young colleagues, are so looking forward to being part of that and other events during the Blas Festival."

Deputy First Minister John Swinney said: "In this Year of Young People it is great to see the Blas Festival showcasing the talent of so many young performers and creating new opportunities for the next generation of musicians and composers.

“This year’s programme, with its outstanding cèilidhs, concerts and other events delivered with the help of youth ambassadors, will celebrate and promote Highland culture to audiences coming from far and wide.

“Blas represents a key part of the Highland cultural exchange and the Scottish Government is committed to further supporting its growth, which will enrich Scotland’s cultural life and contribute to the promotion of Gaelic in Scotland."

Councillor Alister Mackinnon, Chair of the Gaelic Strategy and Implementation Group and Chair of Corporate Resources, Highland Council, said: “The Highland Council has supported the Blas Festival since its inception 13 years ago. The first Blas Festival took place in 2005, it has developed since then, but has still managed to maintain, at its heart, the original Gaelic cultural uniqueness which sees internationally acclaimed artists share the stage with homegrown young musical talent. This year’s Blas programme is exciting, engaging, and educational, especially as we celebrate the Year of Young People. We urge people to attend at least one event and find out for themselves how special and enjoyable this festival of Gaelic music and culture is.”

Ann Marie Reid, Senior Development Manager, Highlands and Islands Enterprise added: “We are delighted to support the Blas Festival which is such an important event for communities across Scotland. It enables young people to increase their skills and confidence as well as showcase their talents while spotlighting the region for visitors and local people to celebrate Highland and Gaelic culture.”

The full programme of events can be found at www.blas-festival.com (external link) along with details of how to purchase tickets, including special prices for Young Scot cardholders.