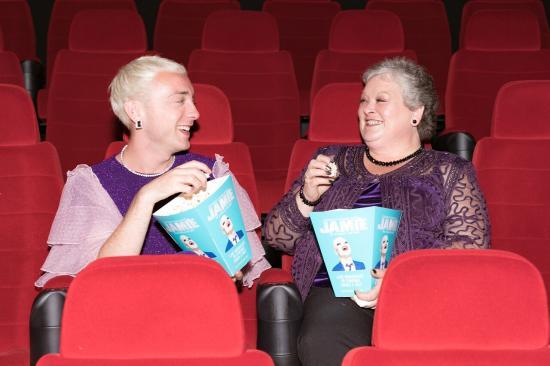 Little did Jamie and Margaret Campbell, from the former mining village of Toronto, County Durham, know seven years ago that their story would inspire a musical. Yet what started as one teenage boy's simple but trailblazing ambition has turned into a huge West End hit - Everybody's Talking About Jamie.

The show, which charts Jamie’s battle to go to his school prom in a frock - and Margaret’s fiercely protective, unconditional love for her son - is funny and poignant by turns and has twice had its run in the heart of London’s theatreland extended. And now those who are unable to travel to the capital have a chance to see the award-winning musical everybody really is talking about; on 5 July the show will be screened live at more than 500 cinemas in the UK and Ireland.

The remarkable sequence of events started in 2011 when Jamie, then just 15 and who had loved performing and dressing in frocks since he was a young boy, contacted a documentary company when he feared his plan for the prom was about to be thwarted by his school.

The resulting film, Jamie: Drag Queen at 16, was shown on the BBC, where it was seen by theatre director Jonathan Butterell. Then, with musician Dan Gillespie Sells and lyricist Tom MacRae, he created Everybody’s Talking About Jamie, which started life the Crucible Theatre in Sheffield in February 2017 and opened in the West End last November.

The extraordinary nightly standing ovations from happy audiences prompted the award-winning West End theatre owner and producer Nica Burns to fast track the show to London as Burns recalls, "I’ve never seen anything like it". The story, inspired by one boy’s experience has universal themes of love, perseverance in the face of adversity and ultimate acceptance. It also has cracking songs, great heart, and a very funny script.

And now it has just been announced that Everybody’s Talking About Jamie is to be made into a film by the creators of Tyrannosaur, which starred Olivia Colman, and the iconic television series This Is England.

"It’s mad, it’s just snowballed," says Jamie. "When Jonathan talked about doing a musical I thought he meant in a community theatre, and when the show went into the West End I thought, wow. Then it was extended and nominated for lots of awards, and now the film. It’s completely taken over our lives."

“As far as we were concerned the documentary was the end of it,” adds Margaret. “Jamie had achieved what he wanted and we never thought in a million years that it would be turned into a musical, and now a film. It has just got bigger and bigger. Every time the phone rings something else has happened.”

But they remain resolutely down-to-earth. Jamie is now forging a career in the creative industries in London, where he moved four years ago, but is touched that people recognise him and ask for autographs and selfies. Margaret has no plans to leave Toronto, however, where she works for the Samaritans. “Oh no. I’ve got too many friends and family there,” she says. “I love the bright lights, but I like to go home after. I’m a home girl really.”

The show details some of the bullying Jamie experienced at school for being gay, and many of those approaching him tell him the show has helped them - whether to come out as gay to their parents or to cope with being bullied themselves.

“People are so positive about the show and say that it’s really helped them,” says Jamie.

Margaret adds: “I still get quite emotional when people come up to me and say something nice about Jamie, because this is the acceptance that he should have had back then.”

But while it has been an exciting experience for Jamie and Margaret, it’s not all West End glitz and glamour. They want to use it to help others.

Jamie is already following in his mother’s caring footsteps by taking over the show’s Twitter feed (@JamieMusical, #AskJamie) each Friday to dispense advice to fans, and with the show’s producers they have been developing an education pack to take into schools, talking to youngsters about issues around acceptance and diversity.

“I may not be the most experienced advice-giver in the world, but I try my best,” says Jamie. “I get a lot of questions about how to handle bullies at school, how not to let them get to you. I tell them I know it’s difficult, but if you focus on what makes you happy you can overcome them.”

Margaret adds “I think the most important thing to remember is that your schooldays don’t last for ever, even though when it’s happening to you it does feel like that. You must talk to somebody - if you can’t talk to your parents, talk to the parents of a friend, or Childline or Samaritans. There is always help out there.”

They would like the live screenings to open up the debate even more. “We hope it will get people talking because the show is a great starting point,” says Margaret. “It’s about being more tolerant and accepting difference. You don’t necessarily have to understand everybody’s situation but at the same time you don’t have to be ignorant.

“It isn’t just about Jamie in a dress. It’s about believing in yourself and standing up for what you believe in in the face of opposition. And it asks, ‘What’s normal? Who defines normal?’ We’re all normal. We shouldn’t put anyone in a box or make them dull and grey. Some people want be in Technicolor.”

Talking of colour, Jamie and Margaret have turned up for this interview in colour co-ordinated outfits - something that often happens. “Maybe we’ve got a weird psychic thing going on, like twins,” jokes Margaret.

They were twinned again at various theatre awards this year, where Everybody’s Talking About Jamie won seven awards. For one event, Jamie had bought a length of “gorgeous red fabric that I knew would look great in a frock”.

Just as they had when he was a boy, Margaret and her mother (who owned a curtain shop and would use the samples) made the material into frock, but now it was from Jamie’s design. “I made a lot of mood boards and pulled a lot of references in, like Vivienne Westwood and Christian Lacroix,” he says. “I wanted it to be classic but make a big statement. The material had this beautiful sheen that when you draped it and the light hit it, it looked fabulous.”

Margaret, meanwhile, had bought her own stunning number in complementary shades - for £5 at a charity shop. “She has an eye for a bargain, me mam,” says Jamie, laughing.

Jamie and Margaret have seen the stage show many times and will be at one of the live screenings. “I still get emotional,” says Margaret. “Every time I say I’m not going to cry but I always take tissues. There’s always something that will set me off.

“It’s our story but we are ordinary people, so everyone can relate to it and that’s why they get pulled in.”

Jamie adds: “It’s a love story really, with a happy ending but it’s also about empowerment, and that really resonates with audiences - whatever and whoever they are.”

The hit musical Everybody’s Talking About Jamie will be broadcast live from the Apollo Theatre in London’s West End to more than 500 cinemas across the UK and Ireland on Thursday 5 July at 7:20pm. Find your nearest cinema and book tickets at: JamieInCinemas.com The show is currently booking at Apollo Theatre, London until 6 April 2019 (nimaxtheatres.com)