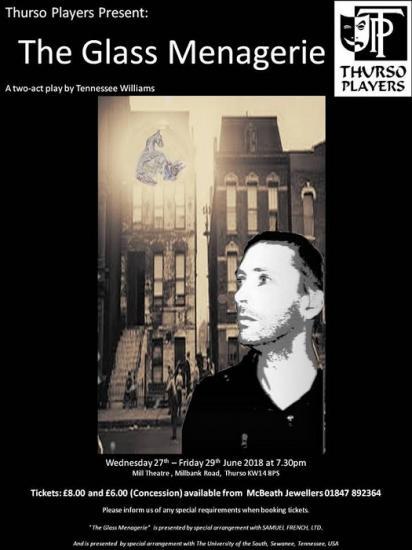 The Glass Menagerie by Tennessee Williams

The Glass Menagerie is a memory play by Tennessee Williams that premiered in 1944 and catapulted Williams from obscurity to fame. The play has strong autobiographical elements, featuring characters based on its author, his histrionic mother, and his mentally fragile sister Rose. In writing the play, Williams drew on an earlier short story, as well as a screenplay he had written under the title of The Gentleman Caller.

The play premiered in Chicago in 1944. After a shaky start it was championed by Chicago critics Ashton Stevens and Claudia Cassidy, whose enthusiasm helped build audiences so the producers could move the play to Broadway where it won the New York Drama Critics' Circle Award in 1945. The Glass Menagerie was Williams' first successful play; he went on to become one of America's most highly regarded playwrights.

The play is introduced to the audience by Tom, the narrator and protagonist, as a memory play based on his recollection of his mother Amanda and his sister Laura. Because the play is based on memory, Tom cautions the audience that what they see may not be precisely what happened.

Amanda Wingfield, a faded Southern belle of middle age, shares a dingy St. Louis apartment with her son Tom, in his early twenties, and his slightly older sister, Laura. Although she is a survivor and a pragmatist, Amanda yearns for the comforts and admiration she remembers from her days as a fêted debutante. She worries especially about the future of her daughter Laura, a young woman with a limp (an after-effect of a bout of polio) and a tremulous insecurity about the outside world. Tom works in a shoe warehouse doing his best to support the family. He chafes under the banality and boredom of everyday life and struggles to write, while spending much of his spare time going to the movies — or so he says — at all hours of the night.

Amanda is obsessed with finding a suitor (or, as she puts it, a "gentleman caller") for Laura, her daughter, whose crippling shyness has led her to drop out of both high school and a subsequent secretarial course, and who spends much of her time polishing and arranging her collection of little glass animals. Pressured by his mother to help find a caller for Laura, Tom invites an acquaintance from work named Jim home for dinner.

The delighted Amanda spruces up the apartment, prepares a special dinner, and converses coquettishly with Jim, almost reliving her youth when she had an abundance of suitors calling on her. Laura discovers that Jim is the boy she was attracted to in high school and has often thought of since, though the relationship between the shy Laura and the "most likely to succeed" Jim was never more than a distant, teasing acquaintanceship. Initially, Laura is so overcome by shyness that she is unable to join the others at dinner, and she claims to be ill. After dinner, however, Jim and Laura are left alone by candlelight in the living room, waiting for the electricity to be restored. (Tom has not paid the power bill, which hints to the audience that he is banking the bill money and preparing to leave the household.) As the evening progresses, Jim recognizes Laura's feelings of inferiority and encourages her to think better of herself. He and Laura share a quiet dance, in which he accidentally brushes against her glass menagerie, knocking a glass unicorn to the floor and breaking off its horn. Jim then compliments Laura and kisses her. After Jim tells Laura that he is engaged to be married, Laura asks him to take the broken unicorn as a gift and he then leaves. When Amanda learns that Jim is to be married, she turns her anger upon Tom and cruelly lashes out at him, although Tom did not know that Jim was engaged. In fact, Tom seems quite surprised by this, and it is possible that Jim was only making up the story of the engagement as he felt that the family was trying to set him up with Laura, and he had no romantic interest in her.

The play concludes with Tom saying that he left home soon afterward and never returned. He then bids farewell to his mother and sister, and asks Laura to blow out the candles.

The play has been performed many times and made into into a film as well as productions for radio and television.