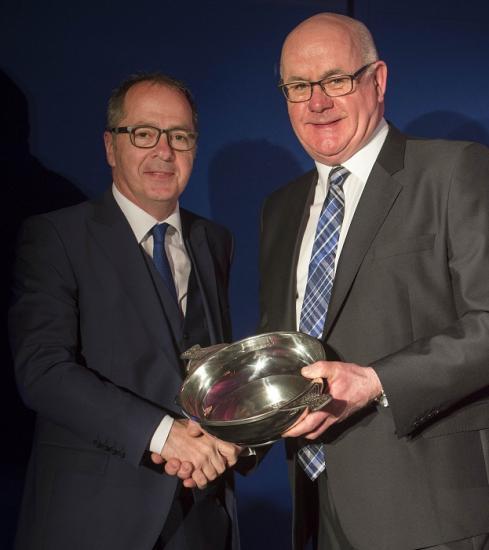 Ireland's The Crossing took home the Single Documentary award with their story of one month on the LÉ Samuel Beckett's deployment in the southern Mediterranean. It shows the reality for both the crew and the migrants as their worlds meet in the middle of the sea, often in the most difficult of circumstances. Wales took home the award for Drama with their crime thriller Bang, a family saga told using two languages.

in the past year.

Celtic Media Festival are also very excited to announce that the 40th Festival will be taking place in Aviemore, Scotland in 2019.

Councillor Alister Mackinnon Chair of Highland Council Corporate Resources and Chair of the Gaelic Strategy Implementation Group said: "I'm delighted to be in Llanelli, Carmarthenshire in Wales to welcome the 40th Celtic Media Festival to the Highland region of Scotland for the 7th time in its long and successful history. I am especially pleased that it will be coming to Aviemore in the Badenoch area for the first time. Aviemore is within the Cairngorm National Park, which is one of two National Parks in Scotland. In the past the festival has been to Inverness in 1987, 1991 and 2015; Skye in 1999, in Fort William in 1995 and in 2007 during the year of Highland Culture."

He continued, "The Celtic Media Festival provides a platform for minority language producers, broadcasters and stakeholders in the broadcasting and new media industry to plan for the future. It is important that The Celtic Media

Festival is supported by the film and broadcast organisations, and also the agencies which have linguistic, cultural and economic development responsibilities throughout the Celtic countries. We, especially young people, as this year we celebrate the Year of Young People, view programmes and consume media very differently from the past, due to the many social media platforms that are available to us. Gaelic and other minority languages must be at the heart of this, as our young Gaelic speakers are, and will be the users and decision makers of the future in this fast moving and developing industry. I also wish to take this opportunity to wish BBC ALBA all the best for the future as it celebrates its 10th anniversary on air in the early Autumn."

Festival Director, Catriona Logan said: "Hard-hitting documentary, ambitious home-produced drama and the best of Celtic radio shone here tonight in Llanelli, Wales, as we set our sights now on the 40th anniversary of the Celtic

Media Festival. We return to Scotland for the landmark event - full circle for a festival that has grown, developed and expanded beyond anything anticipated by the original organisers. Here's to the next 40, and Aviemore 2018."