Cadets Beat the Retreat in Dingwall 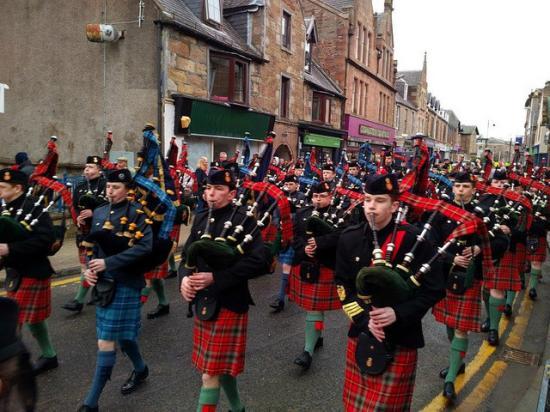 Dingwall once again played host to the massed pipes and drums of the Army Cadet Force on Friday 6 April 2018.

This is the twelfth year that the ‘Beat the Retreat' event has taken place in Dingwall since the Cadets first stepped out in April 2006. The event is firmly marked in the Dingwall events calendar and the Cadets received a warm welcome from locals and visitors alike.

Cadets come from all over the UK every year for tuition at the Cameron Barracks, in Inverness. The Cameron Barracks are the original home of Army piping with the first Army classes run by the Piobaireachd Society there in 1910.

The annual event has gone from strength to strength and the icing on the cake for the Cadets at the end of their week's tuition is the opportunity to show off their skills with the public showcase in Dingwall.

The Cadets formed up at the Army Cadet Centre on Ferry Road and marched along Dingwall High Street where they then massed outside the Royal British Legion and entertained the crowds with a retreat programme. The salute was taken by the Lord Lieutenant, Mrs Janet Bowen.