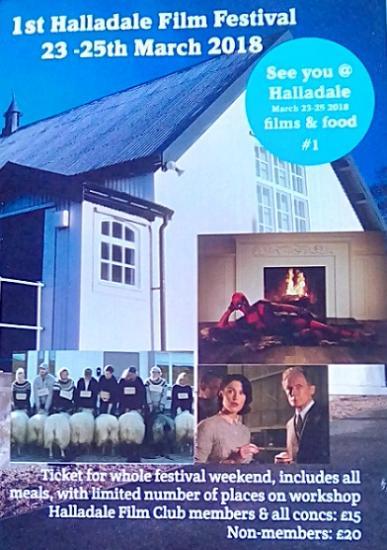 The Halladale Film Festival which is running at the Halladale Hall (A897) from March 23-25th. We have chosen a group of really interesting films and because we are rural, as part of the festival and as part of your festival pass, we will feed you all day on the Saturday March 24th - check out the Facebook Page

And the actual programme of films span Bill Nighy in the more mainstream, 'Their Finest', Indian film, 'The Lunchbox', Icelandic, 'Rams' to local films showing this area and people in the 60's & 70's 'An Album of Memories', the Flow country and a couple of surfer films; 'The Accord’ and 'The Faroes' and closing with the decidedly more edgy, ‘Deadpool' ....

There is also a film making workshop included in the festival pass, but for that you need to sign-up ahead of time. Email.

We want to encourage locals to make wee films of local interest and of the area and if this works, we could screen them at the film club. They can be about - anything - sports, surfing, kayaking, crofting, school or hall events (with permission), in fact any of the important moments in peoples lives that they are willing to share - first day of school, lambing, the aurora... whatever. Two film makers who have lots of experience teaching entry level folk will be leading the workshop on Saturday morning - Holger Mopaupt and his wife Tracey Fearnehough are both film-makers who love the sea so they are quite excited about coming up from North Berwick. They make short everyday life films, so ideal folks to lead this workshop. So on Saturday morning at 10am come get your breakfast veggie or meat sausage bun and the workshop runs until 1pm when it’s time for lunch! Part two runs on the Sunday afternoon from 1-4pm. All included in your festival pass.

Festival pass costs: £15 if you are a concession of any kind (senior/pupil/unwaged) or a member of the Halladale Film Club and if you don’t fit into any of those then it’s £20.

Individual film-only tickets may be purchased at the door at non-members rates: £5 regular, £4 concession & £2 under 16’s.