The Story of a Life by Grayson Perry 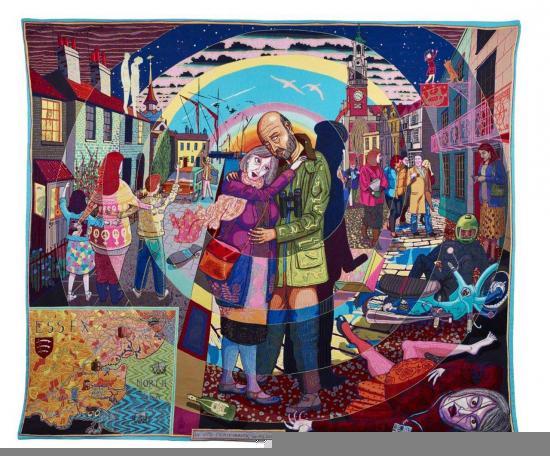 Julie Cope is a fictional character created by Grayson Perry - an Essex everywoman whose story he has told through the two tapestries and extended ballad presented in a new exhibition from the Crafts Council. The Essex House Tapestries: The Life of Julie Cope (2015) illustrate the key events in the heroine's journey from her birth during the Canvey Island floods of 1953 to her untimely death in a tragic accident on a Colchester street. Rich in cultural and architectural details, the tapestries contain a social history of modern Britain that everyone can relate to.

The tapestries are shown alongside a graphic installation, and specially commissioned audio recording of The Ballad of Julie Cope, a 3000 word narrative written and read by Perry himself that illuminates Julie's hopes and fears as she journeys through life.These artworks represent, in Perry's words, ‘the trials, tribulations, celebrations and mistakes of an average life’.

Historically, large-scale tapestry provided insulation for grand domestic interiors; Perry has juxtaposed its associations of status, wealth and heritage with the current concerns of class, social aspiration and taste. To write Julie’s biography, he looked to the English ballad and folktale tradition, narrating a life that conveys the beauty, vibrancy and contradictions of the ordinary individual.

Born in Chelmsford, Essex, in 1960, Perry is known for his ceramic art, in which traditional decorative forms reveal more complex narratives and irreverent political statements. A Turner Prize winner (2003), more recently he has reached a wider audience through a series of socio-cultural television programmes.

The bespoke and playful exhibition design refers to Perry’s vision of the secular chapel. A Young Visitors’ Guide, learning hand out with activities for families and an interactive app to explore the tapestries will also be on display.

In Its Familiarity, Golden, Grayson Perry, 2015. Crafts Council Collection: 2016.19. Purchase supported by Art Fund (with a contribution from The Wolfson Foundation) and a donation from Maylis and James Grand. Courtesy the Artist, Paragon Press, and Victoria Miro, London. © Grayson Perry