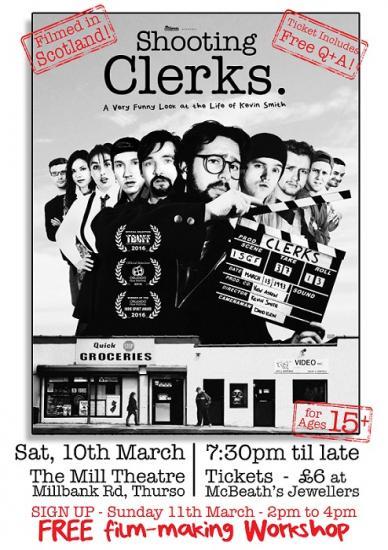 One of our ex members - Brett Murray is returning to the Mill Theatre with his film showing. The film is around an hour and a half long and will be screened on Saturday 10th March (Postponed from 3rd March), followed by a question and answer session and refreshments will be available. You can read more about the film in this article by the Scotsman newspaper -

Tickets for the film screening cost £6 and can be purchased from McBeath's jewellers in Thurso. Shooting Clerks merchandise will be on sale on the night and all proceeds raised will go towards taking the film to Wondercon, one of the oldest comic-conventions in LA. Ticket holders are also invited to a free film-making workshop on Sunday 11th March afternoon 2 - 4pm. Please note, the film is suitable for age 15+.