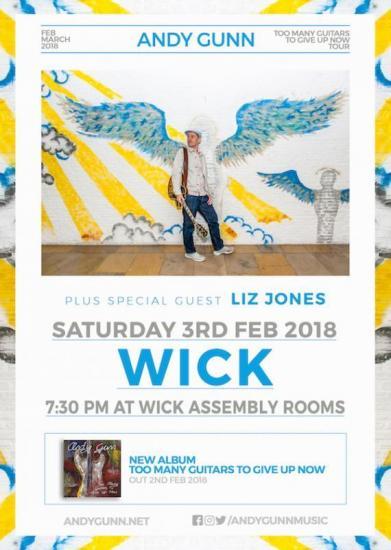 Scottish Guitar Virtuoso Andy Gunn brings his all new line up featuring the cream of Scottish Blues musicians on tour in support of brand new album ‘Too Many Guitars To Give Up Now'. Compared to Hendrix and Stevie Ray Vaughan in the press, Andy has absorbed these classic influences but also honed his own style and voice over the years by the old fashioned route of wood shedding and jamming in every bar and club the length of the UK. He has also played many festivals and shared the stage with such names as Buddy Guy, Albert Collins and Geno Washington. Signed to Virgin at a young age, song writing has also been a vitally important element for this outstanding, soulful yet fiery musician and he has many heartfelt and spiritually themed songs. Support (and backing vocals) comes from wonderful Edinburgh singer songwriter Liz Jones.