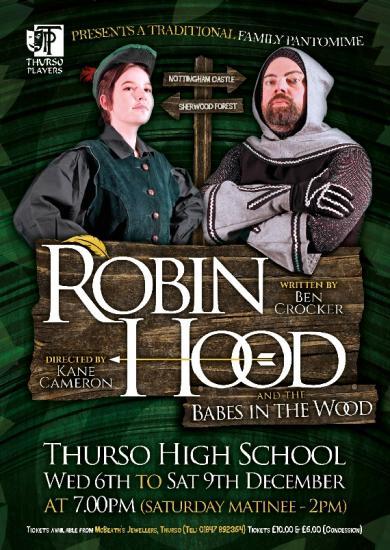 Can our favourite outlaw, Robin Hood, outwit the evil Sheriff of Nottingham who has hatched a cunning plan to dispose of his niece and nephew in Sherwood Forest so he can inherit their fortune?

Come and join Robin's gang and help our hero win the day, and also win the heart of Maid Marian.

NOTE - This year the panto starts 30 minutes earlier than previous years at 7.00pm.

Message From Thurso Players.   Due to the weather/Health and Safety reasons, the Thurso High School is shut today which means that unfortunately tonight's performance of the Thurso Players pantomime has had to be cancelled.
[]
24/8/2017