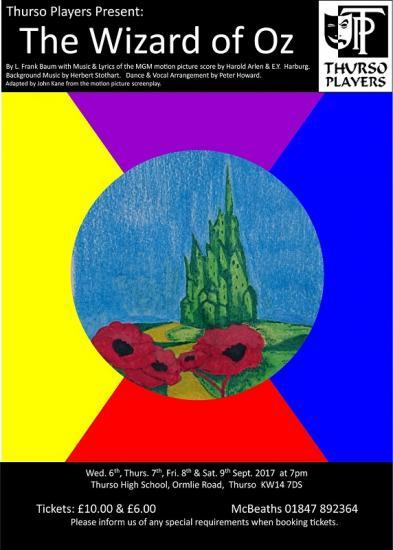 Thurso Players presents the well known story and musical of the Wizard of Oz made famous by the film with Judy Garland as Dorothy. The original book was called The wonderful Wizard of Oz by L.Frank Baum.

Book your tickets now for the musical being preformed at Thruso High School in September 2017 on Wed 6th, Thurs 7th, Fri 8th and Sat 9th. All performances start at 7.00pm

The Story
Dorothy is a young girl who lives with her Aunt Em and Uncle Henry and her little dog Toto on a farm in the Kansas prairies. One day, Dorothy and Toto are caught up in a cyclone that deposits her farmhouse into Munchkin Country in the magical Land of Oz. The falling house has killed the Wicked Witch of the East, the evil ruler of the Munchkins. The Good Witch of the North arrives with three other grateful Munchkins and gives Dorothy the magical Silver Shoes that once belonged to the Wicked witch. The Good Witch tells Dorothy that the only way she can return home is to go to the Emerald City and ask the great and powerful Wizard of Oz to help her. As Dorothy embarks on her journey, the Good Witch of the North kisses her on the forehead, giving her magical protection from harm.

On her way down the yellow brick road, Dorothy attends a banquet held by a Munchkin man named Boq. The next day, Dorothy frees the Scarecrow from the pole on which he is hanging, applies oil from a can to the rusted connections of the Tin Woodman, and meets the Cowardly Lion. The Scarecrow wants a brain, the Tin Woodman wants a heart, and the Cowardly Lion wants courage, so Dorothy encourages the three of them to journey with her and Toto to the Emerald City to ask for help from the Wizard. After several adventures, the travelers enter the gates of the Emerald City and meet the Guardian of the Gates, who asks them to wear green tinted spectacles to keep their eyes from being blinded by the city's brilliance. Each one is called to see the Wizard: Dorothy sees the Wizard as a giant head on a marble throne, the Scarecrow as a lovely lady in silk gauze, the Tin Woodman as a terrible beast, the Cowardly Lion as a ball of fire. The Wizard agrees to help them all if they kill the Wicked Witch of the West, who rules over Oz's Winkie Country. The Guardian warns them that no one has ever managed to defeat the witch.

The Wicked Witch of the West sees the travelers approaching with her one telescopic eye. She sends a pack of wolves to tear them to pieces, but the Tin Woodman kills them with his axe. She sends wild crows to peck their eyes out, but the Scarecrow kills them by breaking their necks. She summons a swarm of black bees to sting them, but they are killed trying to sting the Tin Woodman while the Scarecrow's straw hides the other three. She sends her Winkie soldiers to attack them, but the Cowardly Lion stands firm to repel them. Finally, she uses the power of the Golden Cap to send the winged monkeys to capture Dorothy, Toto, and the Cowardly Lion, unstuff the Scarecrow, and dent the Tin Woodman. Dorothy is forced to become the Wicked Witch's personal slave, while the witch schemes to steal Dorothy's Silver Shoes.

The Wicked Witch successfully tricks Dorothy out of one of her Silver Shoes. Angered, Dorothy throws a bucket of water at her and is shocked to see the witch melt away. The Winkies rejoice at being freed of the witch's tyranny and help restuff the Scarecrow and mend the Tin Woodman. They ask the Tin Woodman to become their ruler, which he agrees to do after helping Dorothy return to Kansas. Dorothy finds the Golden Cap and summons the Winged Monkeys to carry her and her companions back to the Emerald City. The King of the Winged Monkeys tells how he and the other monkeys are bound by an enchantment to the cap by the sorceress Gayelette from the North, and that Dorothy may use the cap to summon the Winged Monkeys two more times.

When Dorothy and her friends meet the Wizard of Oz again, Toto tips over a screen in a corner of the throne room that reveals the Wizard. He sadly explains he is a humbug—an ordinary old man who, by a hot air balloon, came to Oz long ago from Omaha. The Wizard provides the Scarecrow with a head full of bran, pins, and needles ("a lot of bran-new brains"), the Tin Woodman with a silk heart stuffed with sawdust, and the Cowardly Lion a potion of "courage". Their faith in the Wizard's power gives these items a focus for their desires. The Wizard decides to take Dorothy and Toto home and leave the Emerald City. At the send-off, he appoints the Scarecrow to rule in his stead, which he agrees to do after Dorothy returns to Kansas. Toto chases a kitten in the crowd and Dorothy goes after him, but the tethers of the balloon break and the Wizard floats away.

Dorothy summons the Winged Monkeys to carry her and Toto home, but they explain they cannot cross the desert surrounding Oz. The Soldier with the Green Whiskers informs Dorothy that Glinda the Good Witch of the South may be able to help her return home, so the friends begin their journey to see Glinda, who lives in Oz's Quadling Country. On the way, the Cowardly Lion kills a giant spider who is terrorizing the animals in a forest. The animals ask the Cowardly Lion to become their king, which he agrees to do after helping Dorothy return to Kansas. Dorothy summons the Winged Monkeys a third time to fly them over a mountain to Glinda's palace. Glinda greets the travelers and reveals that the Silver Shoes Dorothy wears can take her anywhere she wishes to go. Dorothy embraces her friends, all of whom will be returned to their new kingdoms through Glinda's three uses of the Golden Cap: the Scarecrow to the Emerald City, the Tin Woodman to the Winkie Country, and the Lion to the forest; after which the cap shall be given to the King of the Winged Monkeys, freeing them. Dorothy takes Toto in her arms, knocks her heels together three times, and wishes to return home. Instantly, she begins whirling through the air and rolling through the grass of the Kansas prairie, up to her Kansas farmhouse. She is now in her stocking feet; her shoes were lost forever in the desert. Dorothy runs to her Aunt Em, saying "I'm so glad to be at home again!"

Can our favourite outlaw, Robin Hood, outwit the evil Sheriff of Nottingham who has hatched a cunning plan to dispose of his niece and nephew in Sherwood Forest so he can inherit their fortune? Come and join Robin's gang and help our hero win the day, and also win the heart of Maid Marian.   NOTE - This year the panto starts 30 minutes earlier than previous years at 7.00pm..
[]
30/4/2017