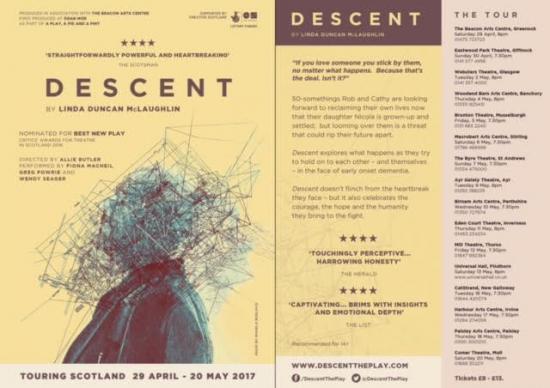 ‘If you love someone you stick by them, no matter what happens. Because that's the deal. Isn’t it?’

50-somethings Rob and Cathy are looking forward to reclaiming their own lives now that their daughter Nicola is grown-up and settled; but looming over them is a threat that could rip the future apart for all three of them. Descent explores what happens as they try to hold on to each other - and themselves – in the face of early onset dementia.

Descent doesn’t flinch from the despair and heartbreak they face; but it also celebrates the courage, the hope, the humanity – and even the humour – they bring to the fight.

‘You might not expect humour in the midst of such grim truths, but it flickers in and out, a sparky reminder of how Cathy and her ilk cling on to hope and humanity’. Mary Brennan, the Herald

Thurso Players presents the well known story and musical of the Wizard of Oz made famous by the film with Judy Garland as Dorothy.   The original book was called The wonderful Wizard of Oz by L.Frank Baum.
[]
4/9/2016