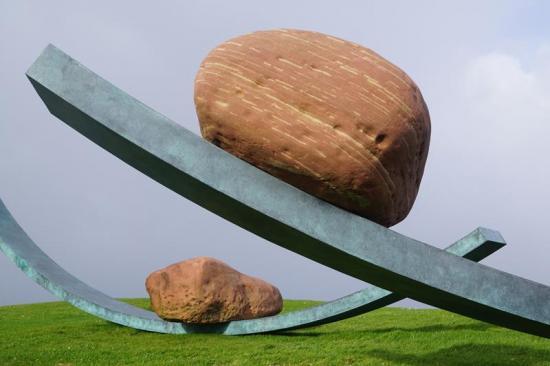 A major public artwork inspired by the natural force of the tidal races in the Pentland Firth is being officially launched today (Saturday 31 October 2015).

The Nomadic Boulders and Swelkie are the latest in the series of temporary and permanent works by artists marking the transformation of John O'Groats, and supported by Highlands and Islands Enterprise (HIE).

The launch is accompanied by a dramatic performance including a new piece of music for John O'Groats.

Research shows that the force of the sea overlooked by John O'Groats regularly moves boulders, the weight of small cars, great distances across the seabed. The sculpture uses local boulders, which appeared on a neighbouring beach after a storm, suspended on three great arcs of bronze. The boulders are of local red sandstone and make a dramatic contrast to the bronze - which is a rich pelagic colour.

To meet the rigorous demands of the location, where winds can be over 100 miles per hour, the elegant appearance hides a complex interior structure of highly engineered galvanised steel, set into substantial foundations.

The artists, Mathew Dalziel and Louise Scullion, said: "We were keen to make work that reflected the interesting dynamic of the area, which is so much more than a famous destination. It is a place where geology, biodiversity and history are present in very unique ways. We were particularly drawn to the power of the sea, squeezed as it is between the mainland and the Orcadian Skerries; for generations these waters have and continue to represent an awe inspiring power that can oscillate between a hypnotic temptress and a terrifying and destructive force."

Dalziel and Scullion's work is rooted in ecological interests and they were fascinated by the breadth and richness of the natural features, flora and fauna of the area. As part of this project they have also developed a set of three collectable badges as souvenirs, celebrating special things in the area.

Hilary Budge, from HIE, said: "We are very excited to be launching the sculpture today as part of the wider regeneration of John O' Groats. It is great to be able to give local school children an opportunity to work with such influential performers and we are delighted to be able to facilitate the creation of this imaginative artwork. John O' Groats is a key destination for tourists as well as our local populations and we believe this piece of work themed on the power of the Pentland Firth, will provide a fitting focal point to this magnificent site."

The dramatic evening performance is also based on the Pentland Firth’s strong tidal forces. Jim Sutherland, artistic director of La Banda, has composed a new piece of music for John O’Groats. A local legend ‘The Swallower’ (known locally as ‘The Swelkie’ from the Norse word Svalga), is about a violent whirlpool off the nearest island, Stroma, and tells of how the sea was made salty. Performed by renowned musicians Fraser Fifield, saxophone, and Steven Blake, bagpipes, the music will reflect the rich musical heritage of the area and also the sounds of daily maritime activity. The event will feature a new epic poem by resident writer and theatre director George Gunn, and will be performed with children from Cannisbay primary and local actors.

Jim Sutherland said: "I grew up in Thurso overlooking the Pentland Firth which holds a very special place in my heart. It was a great inspiration to my fertile childhood imagination with many an hour spent marvelling at it from my bedroom window, wondering what great creatures might lurk in it. I have known it in all sorts of weather, through the seasons and across the years, from the calming sound of it as I stood upon its shores on warm summer days with the taste of the salt on my lips to the thunderous power of it crashing on the coastal rocks through winter storms. These memories will never leave me and I am delighted to have been commissioned to create a new piece of music inspired by this stunning and often treacherous sea which played such an important part in my early life."

The music is available for free download at https://soundcloud.com/jimsuth/the-swallower

Nomadic Boulders: Illustrated talk by artists Dalziel and Scullion (There will also be a rolling slide display of the work at the Outfitters all afternoon).


Time: 5.00 Venue: public area in front of the Storehouse cafe

A special edition of sew-on badges by artists Dalziel and Scullion will be on sale at local businesses.

Local cafes and businesses will be open on the day, and through the launch events.

Dalziel + Scullion first worked at John O'Groats to research, with the community, their Artists Concept Report, 2012* as part of the Transform project for HIE. For the last two decades, their studio has been making artworks that embody creative ways of thinking about ourselves and our relationship with nature. They are interested in imaginative approaches to sustainability, progress, growth, wealth and the common good. The work strives to visualise aspects of shared environment from alternative perspectives and to re-establish and value our engagement with the non-human species we live alongside. Internationally exhibited and commissioned projects include: More than Us - a collaborative project with Scottish Natural Heritage realised as a large scale permanent work in the HQ in Inverness; Rain - a permanent pavilion for KAUST University, Saudi Arabia; the New South Glasgow Hospital Campus - where they developed work thematically around a different natural environment for each of its eight floors.

Jim Sutherland is the Artistic Director of La Banda. Originally from Thurso he is now resident in Midlothian. MG Trads Composer of the Year in 2014 he is a musician, composer and director. With his roots in the Scottish traditional genre his work extends from electronic to orchestral through rock and pop music with songs on the OSCAR winning Disney and Pixar film Brave. His often unorthodox production techniques are legendary; recent large scale site specific work for La Banda Europa includes 'Struileag' performed to an audience of 5,000 in the Commonwealth Games programme 2014.

George Gunn is from Thurso in Caithness where he lives. In 2013 he published his 8th book of poems 'A Northerly Land' and has had over 50 plays produced for stage and radio since 1884. he was Director and co-founder of Grey Coast Theatre company, based in Caithness, 1992 to 2010. In 2012 he participated in the 'Transform' weekend of temporary arts projects at John O'Groats; writing phrases in local dialect as a collaboration with Sutherland artist Gavin Lockhart in a projected artwork in the harbour.

Fraser Fifield, has consistently been guesting and collaborating as a whistle/sax/bagpipe player with a long list of bands and artists in the Scottish music scene and beyond for approaching 2 decades. Described by the Sunday Herald as having "emerged as one of today's outstanding talents" he has released 5 albums of his own Tanar label to date, and was nominated composer of the Year 2010 Scots Trad awards. A Creative Scotland award will lead to a recorded collection of new international collaborations in 2016.

Steven Blake is considered one of the most talented young pipers in Scotland; whether traditional, contemporary folk or compositions. Currently finishing his degree at the Royal Conservatoire of Scotland, he is best known for his work with Rura who won 'Up and coming act of the year' at the MG Alba Traditional music awards 2012, and have performed across the globe as well as extensively in the UK. He has also given solo performances with the RSNO and other major orchestras.

Cannisbay Primary School, close to John O'Groats, has 48 pupils in primary school and nine in nursery. There are records of schools in this area for over 200 years. Involvement of the current pupils is under the leadership of Head teacher Rhona Moodie.

About Highlands and Islands Enterprise

Highlands and Islands Enterprise (HIE) is an economic and community development agency implementing Scotland's Economic Strategy across a region which covers more than half the country.