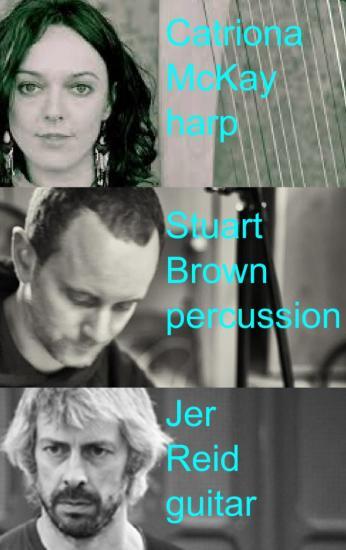 NEW MUSIC
A chance to hear the latest work from a Lyth Residency by three musicians: Catriona McKay, one of the world's leading exponents of the Scottish harp who pushes it to its limits; Jer Reid, an established figure in Glasgow in the world of improvisation; Stu Brown who has built a strong and diverse musical career in Scotland that encompasses all kinds of percussion. Expect some cutting-edge stuff from musicians exploring new sonic territory.

This is an opportunity to hear the latest work from a Lyth Residency. These accomplished musicians are spending a week here developing new repertoire. You can expect some cutting-edge experimentation with Scottish music being taken apart and put together in an exciting new way.

As one of the world's leading exponents of the lever harp Catriona McKay's collaborations and solo performances, recordings and teaching have challenged the boundaries of her instrument and made her a point of pure inspiration for international audiences. She is a diverse musician who pushes one of Scotland's traditional instruments to its limits. She is widely recognized for her unique style, inventiveness and daring rhythmic use of the harp to produce some of the most original and genre-defying music today. Catriona was awarded Instrumentalist of the Year 2014 at the Scots Trad Music Awards. In Nov 2014 she composed a new work Isflak with fellow Scots musician Chris Stout which they performed with the Moscow City Symphony - Russian Philharmonic and Boris Berezovsky in Moscow.

Stuart Brown is a full time drummer, producer, composer and drum teacher based in Glasgow. Since completing a degree in Electronics with Music at Glasgow University in 1997 and going on to study on scholarship at Berklee College of Music, Boston in 1998, Stuart has built a strong and diverse musical career in Scotland that encompasses: jazz, rock, Latin, electronic music and production, free improvisation, composition, teaching, and music for film and advertising. Some of his current bands and projects include his Twisted Toons Septet performing cartoon scores by Raymond Scott, Simon Thacker’s Ritmata fusing classical guitar and jazz trio, Brazilian samba trio Boteco with Mario Caribe and Carrie Fertig’s Glass Percussion project which began during a residency at Lyth last year.

Jer Reid is a musician based in Glasgow. He played in several guitar bands in the early 1990’s, including Dawson, and with Craig Flanagan. More recently Reid has increasingly focused on improvisation, with various musicians including Luke Sutherland and Fritz Welch, and with dancers including Rosalind Masson, Kirstie Simpson and Solène Weinachter. During 2011, in a project titled Winter Cycle, Reid played 31 consecutive gigs, each one as a different duo, in Stereo, Glasgow.Stevie Jones and Jer Reid have previously played live as an improvising duo and as part of larger groups of improvisers. In August 2012 they released an album together Sycamore and Friends with drummer and percussionist Shane Connolly.