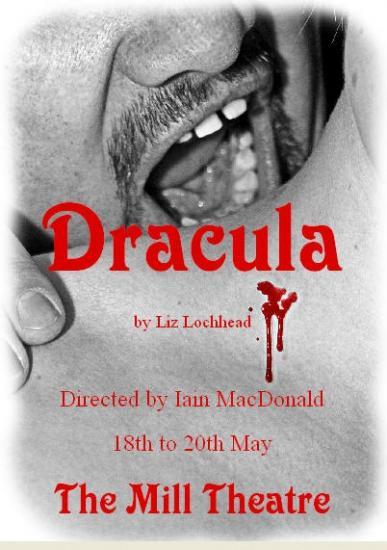 The adaptation has a touch of modern tongue and with with this is mind has had a modern direction. Don't go expecting to see a flowing red cape and a badly constructed Transylvanian accent. You will see the story of Dracula in its purity; which is a love triangle.

Jonathan Harker is a young solicitor intending to marry his true love, Mina Westerman. Before they can share the happy day, Jonathan must finalize the selling of a London home to a man residing in Transylvania called Count Dracula. Unbeknownst to Jonathan, this is all part of Dracula's plan in order to sail to London and feed on the blood of Jonathan's family and loved ones.

There are many subplots and characters in the play so the action never stops moving. I have chosen a soundtrack made up of organ music to help emphasize the dramatic purpose. When people come to see this production they will see a gripping tale of love, passion and blood.

Don't Forget Thurso Players AGM
The date and time for the AGM at The Mill, has been set for 7.30pm on Wednesday 24th May 2006. They need your support so please try to come along if at all possible. In accordance with Clauses 7 & 13 of the Constitution, nominations are invited for the positions of Office Bearers and Ordinary Committee Members. These nominations may be made, in advance of the meeting, by writing to the Secretary noting the nominee's consent or from the floor of the meeting. There can be no proxy voting.